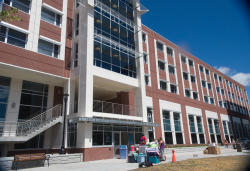 Dragon Hall, which opened as the College’s 16th residence hall in August, was awarded the internationally recognized designation after a thorough project review by the United States Green Building Council (USGBC). Officials from the College and the Dormitory Authority of the State of New York (DASNY), the agency that works closely with the State University of New York to finance, design and build high-quality residential facilities, learned about the honor in early April.

“SUNY Cortland is proud to celebrate yet another milestone in our long-term quest to become a carbon neutral and truly sustainable campus,” College President Erik J. Bitterbaum said. “And I think it is fitting that we receive this recognition during Green Days, a month-long celebration of sustainability across campus and throughout the Cortland community.”

Dragon Hall’s platinum rating also is consistent with the priority placed on sustainable energy and environmental stewardship throughout the 64-campus SUNY system.

“As SUNY’s infrastructure across the state is renovated and built anew, we are committed to ensuring the highest levels of efficiency and sustainability to benefit our students today and for generations to come,” said SUNY Chancellor Nancy L. Zimpher. “Thank you to President Bitterbaum and SUNY Cortland for continued leadership in this area, and congratulations on earning the state's first LEED platinum residence hall designation.”

SUNY Cortland began a push in 2005 to ensure all of the College’s new construction and renovations achieved LEED certification, and Dragon Hall takes that vision even further. Other colleges and universities in New York state have won platinum distinction for academic buildings in the past, but SUNY Cortland is the first state institution, public or private, to earn it for a campus residence hall.

“I congratulate SUNY Cortland and the DASNY team, including consultants and contractors, on achieving LEED platinum certification at Dragon Hall,” said DASNY President Paul T. Williams, Jr. “DASNY is proud to be a part of exceptional work that improves New York state’s energy future while investing in durable and beautiful buildings that support our bright students in their education.”

From Dragon Hall’s elevator to its hallway lights, many features in the four-story, $22 million building operate with an environmental purpose.

“We were hoping for gold (certification) and went much higher,” said Nasrin Parvizi, the College’s associate vice president for facilities management.

The building, which sits near the intersection of Broadway Avenue and Neubig Road, earned a score of 83 out of 89 possible points given its location — including perfect marks in the energy performance category. Energy cost savings for the building are more than 50 percent higher than the national baseline by which similar facilities are measured.

But the LEED certification process involves much more than installing energy-efficient appliances and other “green” technology, Parvizi noted. Steps taken during the demolition and construction phases, for instance, also are considered.

Dragon Hall followed a sustainable path from the start: It was erected over a brownfield — the site of a demolished former residence hall structure — rather than on undeveloped land.

Dust was removed during demolition, gravel laid to filter water run-off into the ground rather than into the street during construction, and air quality monitored throughout the entire building process. Inside, the levels of potentially harmful volatile organic compounds (VOCs) associated with painting and new furnishings were closely monitored. And nearly 25 percent of the building’s construction materials were natural or recycled — many of them harvested or produced within 500 miles of Cortland.

“It takes a lot,” Parvizi said, praising the Stantec architectural group and the LP Ciminelli construction team in charge of the project. “It’s not just how the building is built.”

Even the number of bike rack spaces, the size of trees planted and the widths of sidewalks lining the building were taken into account. The construction team and SUNY Cortland’s Facilities Planning, Design and Construction Office carefully documented every environmentally conscious measure.

Other “green” features of the building include:

Dragon Hall houses more than 220 students plus a residence hall director, with students living in quad-style rooms with shared floor lounges and kitchens.

“(A residence hall) still has to work like a home,” Parvizi said. “This makes it very hard to earn the platinum rating.”

Glass Tower Hall, a campus residence hall built in 2005, became the College’s first project to earn LEED designation while subsequent campus renovations have been built to the LEED silver standard. The platinum distinction that Dragon Hall earned is reserved for building projects that show the most progress in the use of energy efficient design and construction, the use of sustainable building materials and the fulfillment of energy reduction benchmarks.

In 2013, SUNY Cortland purchased 100 percent “green” power in renewable energy credits for the building. Additionally, the residence hall’s solar panel feature won an incentive rebate worth roughly $35,000 from the New York State Energy Research and Development Authority (NYSERDA). And in addition to the solar panel savings, NYSERDA offered a rebate for roughly $103,000 following an assessment of Dragon Hall’s energy efficiency.

“The building absolutely is smart and energy efficient,” Parvizi said.