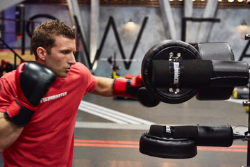 
Kyle Coletti ’05 understands that success requires a certain amount of sweat, no matter if it’s in finance or fitness.

Ten years ago, a few months removed from earning a bachelor’s degree in business economics from SUNY Cortland, he was selling copiers near his hometown of Troy, N.Y. These days, he’s an emerging fitness entrepreneur with a unique workout product — one that has the potential to transform gym routines in the same way that Zumba dance and CrossFit exercises already have.

No, that suggestion is not a stretch. Coletti recently emerged the grand-prize winner of “Sweat, Inc.,” a reality television show that aired on Spike TV and claimed popular personal trainer Jillian Michaels among its judges. Think “Shark Tank” for fitness-related business ideas.

Each week for nine weeks, three promising entrepreneurs competed in different categories for a chance to move on to the show’s finale. Coletti’s grand prize includes $100,000, a Women’s Health magazine feature, support from Retro Fitness locations across the country and a publicity blitz by Michaels, formerly of “The Biggest Loser” fame.

“They’re searching for the next fitness phenomenon,” said Coletti, 32, a managing partner, head trainer and spokesperson for Focusmaster Fitness, prior to the finale’s airing.

During the show’s fourth episode, which aired Nov. 10, Coletti’s “Focusmaster” workout concept — a half-hour program rooted in intense, 30-second kickboxing exercises — was chosen as the winner among fighting-inspired business ideas. That earned him a spot among the final nine contestants in the Dec. 10 finale. Prior to it, he couldn’t discuss the show’s outcome due to confidentiality agreements.

“When you watch an episode, it’s amazing how fast it goes by,” said Coletti, recalling his more than six weeks living in a Los Angeles hotel during taping. “The whole thing felt like a dream.”

You could say the same about his young career — one that began with the goal of landing a big city job in finance, but instead has been defined by the business that spurred his recent trip to Hollywood.

“When I was at Cortland, my thought was that I’d wear a suit to work and get into financial planning,” said Coletti, who played for the men’s ice hockey team when he was a student at SUNY Cortland.

Coletti’s father owns a successful catering and hospitality business in the state’s Capital Region, so growing up, Coletti always entertained the idea that he’d one day like to work for himself. He followed his wife, Jamie Cerqua Coletti ’06, when she relocated after college to New York City for physician assistant school. Kyle initially found work in a back-office commodities job with Morgan Stanley, which eventually turned into an opportunity working under one of the most successful brokers at the financial services corporation.

The pay was good, he passed several of the demanding tests for registered financial representatives and he saw a clear path to career success in a demanding industry. Yet Coletti spent his morning and evening train rides entertaining innovative business ideas tied to fitness.

“On one hand, I was very fortunate to land a good corporate job working for some very good people,” Coletti said. “But at the end of the day, I didn’t have that peak sense of personal fulfillment.

“Ultimately, to be your own boss, you’ve got to take certain risks. And when you’re younger, you can get away with it.”

For Coletti, that meant giving up a good paycheck in his 20s to relocate back to the Albany area with his wife in 2011. Fortunately the foundation of his brainchild already had been laid. Almost 20 years earlier, in 1994, two of his current business partners built the Focusmaster G-1000, a versatile striking machine for solo martial arts training. But at that time, the machine’s development was simply a side business for those eventual partners, who also worked for the hospitality company owned by Coletti’s father Gene.

Gene Coletti joined the Focusmaster venture in 2001, but the operation remained a hobby business and reserved for fitness trade shows. The equipment proved innovative and effective. Its price point, however, geared it more for commercial gyms than individual home users. When Kyle came on board full time more than four years ago, he soon realized the future of Focusmaster would be defined by a unique workout program, not equipment sales alone.

Success was slow at first and it started with four people in a small carriage house portion of a garage. Coletti tinkered meticulously with the workout, re-shooting take after take for video demonstrations.

“Six months in, I hadn’t made a dime,” he said. “But before you knew it, people heard what was going on and started asking, ‘Hey, what are you guys doing in that garage?’

The first Focusmaster Fitness studio opened in Troy in 2013 and a second one recently opened nearby in Loudonville, N.Y. They’re grounded in a boutique fitness belief that the most rewarding gym experiences are reinforced by community and accountability, and in turn worth more than a membership to a big-box gym.

The “Focusmaster” workout concept that Coletti pitched on “Sweat, Inc.” is defined by scalability of boxing and kickboxing exercises rather than set repetitions or lifting heavy weights. He even turned it into a “Fit 30” workout DVD for home users without fighting equipment.

“Everything we do is 30 seconds,” said Coletti, who was initially selected for the cable show after being discovered by a television production agency at a national fitness convention. “We tell people, ‘Get to that 30 seconds.’

“You trick your mind into working harder than it thinks it can because every 30 seconds, you know you’re getting a change and you’re never that far from a rest. You’re constantly competing in your mind to drive a little further, whether you’re in a class or watching the home DVD.”

That mindset comes from Coletti’s hockey DNA. When he was first brainstorming workout ideas on New York City subway trains, he recalled the feeling of chasing a puck into the corner of SUNY Cortland’s Alumni Arena ice rink. It’s a mentality that served him well in the past as an aspiring financial advisor and now as an emerging fitness entrepreneur.

“There’s always been that fire in me — this need for competitiveness, consistency, those natural endorphins being released,” Coletti said. “This whole experience has been incredible.

“It’s going to be a cool story to tell down the road.”