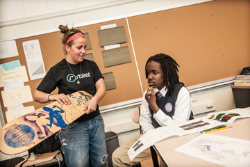 
Growing up in Fredonia, N.Y., Molly Fogarty ’11 learned the secret to never being bored: Spell it b-o-a-r-d.

“I would go to the ski club with my friends,” Fogarty recalled. “All of my girlfriends would be skiing but I was the only girl who was snowboarding.

Four years after graduation, the former sport management major and communication studies minor has turned her love of that culture into a career. Fogarty is program manager with STOKED, a small New York and Los Angeles based non-profit that sends inner city youth to the slopes, the surf and the skate park in order to build their confidence, capability and college potential.

Stoked is a combination of afterschool programs, weekend sports mentoring and professional college and career guidance for high school students. Now living in Astoria, Queens, N.Y., Fogarty manages the organization’s contractual programs with schools in Bronx and Brooklyn. As part of her job, Fogarty leads the teenagers on weekend trips to a community skate park, to Belleayre Mountain ski resort about two-and-a-half hours north of the city, or to Rockaway Beach on the south shore of Long Island.

“Stoked” isn’t just youthful slang for intense enthusiasm. It’s also an acronym standing for success, teamwork, openness, kudos, energy and determination. The agency was founded by Steve Larosiliere, a former recruitment manager for Mentoring USA who was tired of the traditional mentoring programs for underprivileged children, which seemed to primarily involve eating pizza, going to the movies and helping with homework.

Instead, he wanted to share the actual life lessons he learned as a snowboarder, such as goal setting, overcoming obstacles, and how to think and dream big for one’s future.

“It’s our 10th anniversary,” Fogarty said of STOKED. “We promote college and career readiness through the discipline and morals of action sports. We are only working in underserved populations.”

Stoked depends as much on volunteer mentors as it does on raising money and contracting with schools. 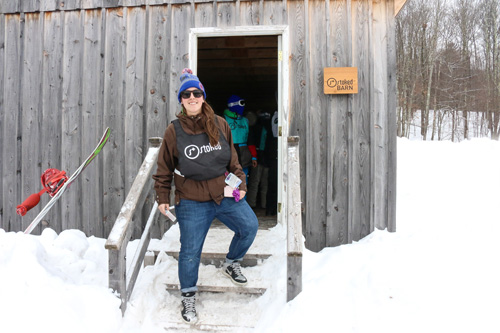 “A lot of people who grew up with these sports feel like giving back,” Fogarty said.

“We have a lot of friends who give their time and equipment. We also get a lot of donations for gear. People have loaned us a shack out in the Rockaways to store our surfboards and a place for our snowboards up in the Belleayre Mountains. They have been really giving, really generous with their time, energy and money to this.”

The kids, for their part, design and build their own skateboards and are responsible for getting to and from the beach or park — on time — by public transit.

The young men and women come to appreciate the adventure outings, she said. For example, many teens have been transformed by the Rockaways, a beach in a non-affluent part of Queens that was especially hard hit by Hurricane Sandy.

“It’s a great place to learn, a really nice surfing community,” she said. “The kids meet us out there, it’s great. They take the train or subway there just like we do. It teaches them real interpersonal skills that are crucial to success in any angle of the next step in their lives.”

“Rugby was this awesome sport for me because it brought a community of really laid-back and down-to-earth people into my life,” she said. “Rugby was a huge part of my social life in College. I’m still really close to a lot of the people I met, and rugby has become a lifelong sport for me to play and watch.”

Fogarty has retained ties to her alma mater. She attended a rugby-themed reunion and, after enjoying one Cortaca gathering three years ago at Manny’s in Manhattan, she asked a New York City chapter organizer she met there, Robert Vinal ’71, about helping out the next year.

“Bob was the official organizer,” Fogarty said. “I was on the New York City chapter committee to make sure it was filled and everyone was happy.”

By enlisting her friends and spreading the word via social media, Fogarty helped pack Manny’s for the 2013 Cortaca event. She also helped organize the 2014 event, during which an even larger group of around 500 graduates flocked to a bigger tavern, Stout, to watch the game live via streaming video.

“It’s nice to meet up with other New York City alumni because it’s such a thriving community of alumni,” Fogarty said. “I like to see what they are doing with their lives and catch up with them.”

Fogarty could tell her classmates an inspiring story about making it in the Big Apple. After walking at graduation, she still needed an internship experience to complete the requirements for a degree in sport management. So she moved to New York City for a post with the United States Tennis Association’s U.S. Open, which took place from June to September in Flushing, N.Y. As an intern, Fogarty joined 10 people working to correctly identify and credential all employees of the U.S. Open.

Once that ended, to remain in New York she took an entry level job with an information technology company to pay the rent but began to volunteer with STOKED.

“I knew I wanted to give back and give kids what I grew up with,” she said.

She accepted what was then available at STOKED, a part-time job working 10 hours a week with youth. She quit her full-time job.

“Then I wedged my way into STOKED. I did marketing, then worked on the Website and was asked by my boss to be the official planner for an event, The STOKED Awards. It took three months to plan and I formed a great relationship with the team.”

She continued as a marketing and outreach coordinator until last August, when she was promoted to her current job as program manager.

“It’s perfect for me, it caters to my niche, sport management, and my background in marketing, business management and accounting. My role is to oversee a lot of what goes on and so I’ve had to revert back to a lot of what I learned in college.

“I never imagined I would get to work at what I really wanted to, but I did. I’m really happy … STOKED if I must make a corny pun.”