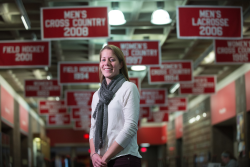 
Jaclyn Lawrence ’12, M ’14, recalls a trip to Oneonta as a member of SUNY Cortland’s volleyball team.

Walking into SUNY Oneonta’s Alumni Field House, Lawrence was met with a display celebrating Oneonta’s 2003 national champion women’s soccer team. For Lawrence, a self-described “history buff,” learning about Oneonta’s past was a thrill, but it made her wonder whether SUNY Cortland, with its sterling athletic reputation, had won any national championships.

Lawrence, now SUNY Cortland’s assistant director of athletics for events, marketing and development, has worked with Director of Athletics Mike Urtz to make sure those impressive victories get a lot more attention by creating a Hall of Champions along the south side of Corey Gymnasium.

A sea of red banners, one for each of SUNY Cortland’s 25 national team champions, was installed in the ceiling outside Corey Gymnasium in February. Urtz has wanted to create a Hall of Champions for more than a decade. His vision sees it growing in the coming years as the Athletics Department finds ways to display more trophies and memorabilia.

“I was a student athlete here and I never knew how good we were,” Lawrence said. “I remember going to Oneonta and in their main venue, they had trophy cases and I was like, “Wow. They won a national championship in soccer. That’s so cool.” Little did I know that we had 23 here that I had no idea about. We want the Hall of Champions to be a focal point of the venue and a place to celebrate our athletic achievements.”

SUNY Cortland won NCAA Division III national championships in baseball and women’s lacrosse in 2015, bringing the College’s title total to 25. There is room for additional banners for future championship teams and Lawrence and Urtz are planning to expand the Hall of Champions to include photographs, trophies and other recognitions of SUNY Cortland’s individual national champions in the years to come.

“We have much larger plans for that hallway,” Lawrence said. “We want to make it a center hub for our national championship trophies and to display our individual national champions. We want to post pictures of celebrations and make it its own little archive and museum. I think our coaches are excited to see the first steps being taken, and we want to keep it rolling from here. It’s one step at a time, but this is a step in the right direction.”

The SUNY Cortland C-Club athletic Hall of Fame display is located in the Hall of Champions. A wall featuring the most recent Red Letter Award winners is located at the east end of the hallway. SUNY Cortland head coaches in each sport recognize a Red Letter athlete each season for outstanding athletic skills, team leadership, personal development as a player or any combination of reasons.

The Hall of Champions will be a powerful display for alumni and athletic recruits visiting campus. It will also be a place for current students to study and socialize.

“We envision it as a hallway that’s interactive but also a spot where students could hang out,” Lawrence said. “We’re going to have some seating in there and make it a spot where people can hang out between classes and have all kinds of memorabilia there interactively as well.”