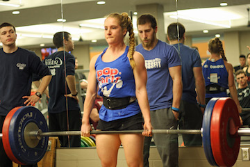 Keegan owns four world records in powerlifting and will represent the United States for weightlifting at the World University Championship (WUC) in Merida, Mexico, next month.

What’s truly remarkable is how this collegiate athlete only began seriously training for weightlifting competitions over the past nine months. During that time, she has gone from winning the 2015 Strong Woman Award through SUNY Cortland Recreational Sports to competing internationally.

“Up until about a year ago, I spent a lot of time training for CrossFit,” explained the exercise science major, who is a certified instructor for the popular, multi-disciplinary fitness regimen.

It wasn’t until her trainer — and now boyfriend — Josh Brown ’16, a former fitness development and exercise science major, returned from a four-month internship in Olympic-style weightlifting in Colorado Springs and set his sights on producing a polished weightlifter that Keegan started taking it seriously.

“She’s just stupid strong for her size — there’s no other way to put it,” Brown said. “I told her that she had a really good chance at being exceptional as a weightlifter, but she would need to quit everything, including CrossFit, to focus on the training.”

When Brown returned from his internship, he was determined to utilize his calculated science-based athletic instruction to develop an individualized training and nutritional program specifically for Keegan.

“He kept saying, ‘just give me six months to train you,’” Keegan said.

What began as a determined partnership blending an athlete’s abilities and a coach’s vision transcended the boundaries of the gym, culminating in Keegan’s four International Powerlifting World Records and a coveted spot on the U.S. team at WUC for weightlifting.

At about the time Brown began training Keegan, he put his background in fitness development and his expertise in the scientific bio-mechanics of movement to start his own online business in February 2016. Science Based Athletics (SBA) offers clients individualized training programs through an online virtual platform.

“SBA is the way athletes can move to the next level,” said Brown, who analyzes video feeds of clients’ exercise techniques. “And (Keegan) was perfect for it.”

Beginning her training as early as 6 a.m. on some mornings, Keegan plants herself at the gym and follows Brown’s workout regime anywhere from two to four hours a day.

No stranger to the level of commitment required of college athletes — Keegan arrived at the SUNY Cortland campus as a freshman soccer player for the Red Dragons — she said she manages to balance academics with serious sports training.

“It’s hard work,” Keegan said. “But I love the individual competition of the sport.”

Following Brown’s detailed training program and regimented diet, Keegan participated in two local weightlifting meets that ended with the qualification for the one thing Brown promised Keegan from the very beginning — a competition on the national stage.

Training for the National University Championships this September in Louisiana required Brown and Keegan to get creative about communicating, as they were often in different states or cities, based on professional or academic obligations.

“She’d videotape herself while performing lifts in the gym,” Brown added. “I’d carefully watch and analyze the movements and we’d talk about it.”

The training paid off. Keegan’s performance at the University Nationals earned her a coveted spot at the World University Championships as part of the U.S. team. Keegan tied for a gold medal in the snatch (156 pounds), earned a silver in the clean and jerk (191 pounds) and a silver overall.

“When you’re on stage, setting up for a lift, there’s a ton of distractions and noise,” Keegan said. “I found myself practicing visualization, which I learned from a sports psychology course I took.”

Considered a tier directly below that of the Olympics, WUC gathers university athletes from across the globe, up to the age of 28, who rank as the top athletes in 37 sports ranging from archery to water skiing.

Listed as the fifth top female collegiate weightlifter in the nation, regardless of age or weight class, Keegan continues to raise the bar on performance.

Keegan, who packs a powerful punch in her petite frame, will represent the U.S. in the lowest weight class as she heads to her first international competition in Merida, Mexico from Nov. 13 to 17.

Keegan’s participation on the international stage and the presence of her trainer and coach, Brown, requires them to fund the trip on their own. An estimated $4,000 is a figure they’re working toward raising through a series of fundraisers, including a GoFundMe page and other family and community-based support.

Because Keegan achieved national weightlifting recognition so quickly, she doesn’t have the lucrative backing of a sponsor.

“Generous supporters have helped us raise about $3,200 toward our goal,” Brown said.

As part of the International University Sports Federation, the WUC takes place every two years. This year presents Keegan with an incredible opportunity to show the world what she is actually capable of doing.