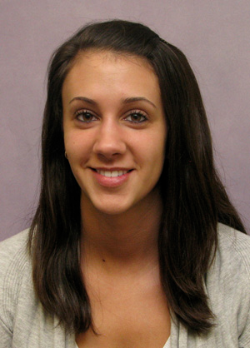 The senior from Westmoreland, N.Y., was chosen after being reviewed by the Cortland Chapter Scholarship Review Committee for academic achievement and for having the greatest combination of involvement in and service to the chapter, the university and the community.

Pick's application was then sent to the National Chapter, which decided to award her a National Scholarship of $2,000.

Tau Sigma honored 31 students with 2011 year scholarships ranging from $250 to $2,500. Binghamton, Fredonia and Albany were the other SUNY schools to have scholarship recipients this year.

She is currently a senior at Cortland majoring in early childhood/childhood education with a concentration in social sciences. Pick transferred from Mohawk Valley Community College with an Associate in Liberal Arts of Science: Early Childhood Education.

At Mohawk Valley, Pick also was a member of the Phi Theta Kappa Honor Society and secretary of the Education Club. She captained the varsity cross country for indoor and outdoor track team. She was also awarded NJCAA All-American Athlete for Cross Country and Outdoor Track for 2007-09.

After transferring to SUNY Cortland, Sara participated on the cross country team in Fall 2009. In Spring 2010, she joined Tau Sigma and was elected president.

“She immediately took on a leadership role and has set a great example in the organization by attending transfer student events, such as the New Transfer Picnic, helping with Class Finding Tours and volunteering at the Cortland Pumpkin Fest,” Quinlan said. “Sara has spent time assisting with new initiatives such as fundraising, collecting and delivering food for Tau Sigma’s first canned food drive and also taking part in raising money for Relay for Life.”

She was also recently accepted into the study abroad program and will be spending the fall semester in Australia.

“I have always heard such positive comments about SUNY Cortland, especially their School of Education,” says Pick, a 2007 graduate from Westmoreland High School who is the daughter of Trudy and Stephen Pick. “I wanted to be involved in that positive energy.

“I want to become a New York state accredited early childhood teacher and continue my education in a master’s degree in special education,” she says. “I want to be a life-long learner for both myself and my students.”