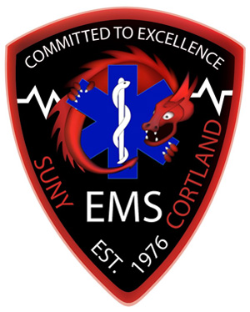 
SUNY Cortland’s Emergency Medical Services (EMS) has come a long way from its modest beginnings in a residence hall storage room — so far, in fact, that the student volunteer group has been named the New York State EMS Council’s 2012 Agency of the Year.

“This award really goes to generations of SUNY Cortland EMS volunteers,” said council director Lee Burns. “Every good thing that’s ever happened to them has been to their credit.”

There are 18 regional councils across the state and each one is eligible to nominate its local winner for the state’s top prize. The Central New York Regional EMS Council named SUNY Cortland EMS its Agency of the Year in May.

“I know very well that SUNY Cortland has come a long way,” Burns said of the student group that was founded in 1976. “So this isn’t specific solely to individuals currently on the squad. It goes to years of Cortland students.”

Susan Barg ’85, who today lives in Ballston Spa, N.Y., was a first-year student in 1981, the year EMS began responding to emergency calls on campus. Up to that point, the student group had held regular first aid courses for students, without a major response role on campus.

SUNY Cortland EMS was “primitive” in its early years, Barg said. The only way for the group to communicate with public safety — now known as the University Police Department — was by telephone. A first-floor storage room in Winchell Hall was converted into a command post with bunks, a television and a few furnishings. And student volunteers responded to all campus medical emergencies by foot, without the luxury of a response vehicle.

“We called ourselves the sneaker patrol,” said Barg, who has worked for the New York State Health Department for the past 26 years. “We used to comment on how many pairs of sneakers we went through in any given semester.”

The group’s budget grew as time went on. EMS members eventually were able to purchase two-way radios to communicate with each other and with public safety. By 1984, two rooms in the former Van Hoesen Hall television studio had morphed into the group’s campus home.

Today, the EMS headquarters in Van Hoesen include “everything a member could need,” according to recently graduated chief Matthew Green ’12. There’s a lounge for its student volunteers, a large equipment room, a patient care room, a kitchen, a bunk room, shower and laundry room. There’s also an ambulance, which serves as a mobile command center, and a first responder truck that EMS uses.

Although many things have changed since the EMS crew’s early days, including a participation boom that has produced an all-time high in membership, a few of the group’s qualities have stayed the same.

“These students were always caring,” said Marley Barduhn, the College’s assistant provost for teacher education and a member of the EMS advisory committee since 1979. “That’s never changed.”

Strong leadership has been a trademark of the most dedicated EMS staffs, she said.

“As four years roll by and an entire group leaves, we’re back to square one,” Barduhn said. “Things are always evolving and you see a legacy of achievement, along with a rising level of expectations, passed along.”

Each year, EMS officers call on alumni members when they’re in the process of making important decisions, Green said. This year, for instance, EMS drafted a mutual aid policy with the Cortland City Fire Department, which says that if the department requires additional medical assistance for its firefighters while they’re battling a fire in the community, SUNY Cortland EMS could be called in to assist.

Green discovered that past members of the College’s squad had developed a similar mutual aid policy several years ago.

“It’s so much better when you’re thinking of a new concept to go to an alumni member and say: ‘Hey, have you guys tried to do this in the past?’” Green said. “With the mutual aid contract, it just made life so much easier.”

Other SUNY Cortland EMS highlights from the past year included its relief efforts with flood victims in the Binghamton, N.Y., area, new programming related to underage drinking on campus and in the community, and responding to hundreds of emergency calls on campus without dropping a single one.

“How many students have thousands of people per week that they’re responsible for?” Barduhn asked. “These are student professionals who have a legal obligation to respond and they have a medical obligation to treat. And they do a great job.”

Barg, the alumna who enjoyed a four-year EMS experience and now works in the healthcare field, praised the “life skills” she developed volunteering. And Green, who is currently working for a private ambulance company near his Commack, N.Y., home, already is aware of them, just two months removed from his SUNY Cortland experience.

“Everyone who joins SUNY Cortland EMS, they become part of this awesome came-from-nothing story,” Green said. “It teaches you important rules to live by in life and in EMS.