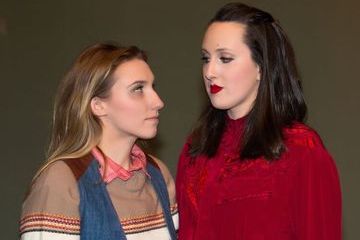 
The SUNY Cortland actors performing in the upcoming production of Caryl Churchill’s “Top Girls” have spent plenty of time learning about the rise of feminism in Margaret Thatcher-era England.

They’ve also discovered that the themes the all-female cast of this play explores — primarily social and workplace achievement for women — are more relevant than ever in the post-#TimesUp and #MeToo landscape.

“You’ll see it when you walk out of the theatre and you see it in your real life,” said sophomore musical theatre major Nicole Furka, who plays three roles in “Top Girls.” “You see the troubles that these women are going through and you see how strong the women in this show have to be in the world of business and a man’s world.”

“Top Girls,” which debuted in 1982 and opens in the Dowd Fine Arts Center Lab Theatre on Wednesday, Feb. 21 at 8 p.m., tells the story of sisters Marlene and Joyce. Marlene is a driven employee at the Top Girls employment agency and rises through the ranks, earning a promotion over a male co-worker. Joyce, on the other hand, stays at home to raise her daughter, Angie.

The opening scene of the play features a fantasy dinner celebration for Marlene’s promotion with a series of historical and fictional guests. Pope Joan, a medieval myth of a woman who posed as a man to serve as pope, Patient Griselda, a character from Chaucer’s The Canterbury Tales and Isabella Bird, a 19th-century English explorer, are among those who share their experiences at dinner. Each has her own definition of feminism yet their struggles are mirrored by the characters in later scenes.

“Marlene finds different pieces of herself within each woman at the table,” Reidy said. “In some she sees more of herself in and in others she hardly sees herself at all.”

Marlene and Joyce clash throughout the play as each struggle to come to terms with their lifestyle choices. Sacrificing her personal and family life, Marlene is a devout Thatcherite, subscribing to the conservative, business-first ideals of British Prime Minister Margaret Thatcher. Joyce is portrayed as resentful of Marlene’s career and offers a middle class perspective on an era of change for women in the workplace.

“Throughout history, women have had to be mothers and raise kids and do household duties, that was their job,” Reidy said. “Later, as we gained more independence and equality, we had the choice: do we want to stay home and be a mom or work a full-time job? Some people try to find a balance and maintain that balance, which is extremely difficult and will likely remain difficult for quite some time.”

Furka plays Joyce, Isabella Bird and Mrs. Kidd, the wife of the man who lost a promotion to Marlene. She is particularly excited to play Isabella Bird, who travelled extensively across Asia and the Americas in the late 1800s and was the first woman inducted into the Royal Geographical Society. Much of her dialogue in “Top Girls” comes directly from Bird’s own writing.

“They were such leaders and it’s about how they changed the world in a man’s world,” Furka said of the characters in the dinner scene. “Especially now, when we have the #MeToo and #TimesUp campaigns, it’s amazing to show this.”

The faculty and staff of the Performing Arts Department selected plays and musicals for the 2017-18 season around a theme of female empowerment. Recent attention on sexual assault and harassment issues have made “Top Girls,” after 36 years, more relevant than ever.

“Come see ‘Top Girls’ to see #TimesUp in action and #MeToo in action,” Reidy said. “It’s just so powerful. All this feminine power in one small little play. It’s very impactful and it will hit you when you least expect it. It will dwell in your brain for a few days and you’ll think, ‘I never would have thought about it that way. I never would have thought about that at all.’”

“Top Girls” will be performed at 8 p.m. from Wednesday, Feb. 21, to Saturday, Feb. 24. A 2 p.m. showing concludes the run on Sunday, Feb. 25. Tickets are $9 for students, $16 for faculty, staff and senior citizens and $19 for adults. Tickets are available at Cortland.edu/boxoffice.

“9 to 5,” a musical based on the 1980 Dolly Parton film of the same name, will be performed on six dates between Friday, April 13 and Sunday, April 22. The musical approaches themes of inequality in the workplace, albeit in a much lighter and comedic style.