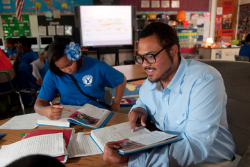 
Anne Burns Thomas, professor in the Foundations and Social Advocacy Department, and James A. Felton III, SUNY Cortland’s chief diversity officer, co-authored a story that appeared in the December 2019 issue of Insight Into Diversity.

Since the program was launched in 1998, more than 125 Cortland students have graduated from C.U.R.E. Nearly 95% have completed or are working toward a two-year teaching commitment in urban schools and three out of four continue their urban teaching career beyond two years.

C.U.R.E. thrives thanks to tuition support, the real-world teaching experience gained by college students and the formal mentoring from faculty, staff and the C.U.R.E. graduate assistant.