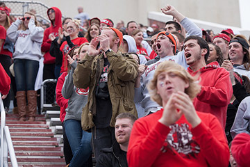 
Individuals who are 60 years or older who already make the Cortland area their home have a new reason to feel it’s the ideal place to spend their sunset working years or retirement.

SUNY Cortland Athletics, in a partnership with the Cortland County Area Agency on Aging, recently began offering master passes to allow these senior citizens, along with one guest, into every regular season home athletic event free of charge.

Proponents hope a much greater age range of Red Dragon fans will fill the stands at the Stadium Complex, Corey Gymnasium and other campus athletic venues.

“We are already getting calls and requests, which is awesome,” said Jaclyn Lawrence ’12, assistant director of athletics for events, marketing and development at SUNY Cortland.

The inquiring seniors are responding to an advertisement in the Area Agency on Aging’s March-April senior newsletter.

“It’s absolutely a win/win, that’s how I see it,” Lawrence said. “Our athletic program is not about making money, it’s about having people in our stands and integrating into the community more. It’s about having young people learning from older people. It’s what I’ve been trying to do in my position: get more people involved.”

The teams should soon begin to see more boosters alongside court, field and rink.

“It just happens to work out timing-wise,” Lawrence said. “Our students tend to come to a Friday night basketball game and then the team plays again on Saturday afternoon when the older people might be more inclined to come. That kind of balances out.”

The guest passes allow for some really pleasing fan combos of senior citizen couples as well as parent-child and grandparent-grandchild, Lawrence noted.

“An older gentleman called after the ad ran in the senior newsletter and was so excited about the master passes,” Lawrence said. “His granddaughter is studying sports medicine here and now he can go to games where she’s doing athletic training stuff.”

SUNY Cortland Athletics currently doesn’t charge admission for baseball, softball, swimming, track and field, or soccer. Lawrence has noticed that about 30 percent of people in the stands at baseball games are from older generations and wonders if the rest of the games will soon begin to see that much age diversity.

Athletics will work closely with the Area Agency on Aging to send fall, winter and spring sport schedules to all the senior citizens with senior passes.

Lawrence conceived of growing the Red Dragon fan base over the holidays in Fort Myers, Fla., where she noticed that about 80 percent of attendees at a Florida Gulf Coast University women’s basketball game were senior citizens.

“I never realized it until I went to this collegiate game and saw it for myself,” she said.

While Cortland County has nowhere near the resident base of senior citizens that Florida does, Lawrence is convinced that the master passes should improve the number of fans attending home games. But the benefits go way beyond that.

“In Florida, I noticed they were super engaged in the game, super excited,” she said. “They behave like true fans, not talking with friends or on their phones. They get to know the athletes and feel totally at home in their venue. They were standing up, cheering and clapping during starting lineups.

“The older generation appears to be better fans, more positive and louder,” Lawrence said. “They’re not distracted by other things.”

By chance the next day a Tompkins County senior citizen emailed Lawrence inquiring about entertainment opportunities in Cortland County, where the woman planned to move soon.

“I met for an hour with this woman, Carol Milton, to get her perspective on things,” Lawrence said. “Going to that game and then getting that email from her, it was perfect timing.”

Lawrence offered the woman a master pass and in turn was referred to Elizabeth Haskins, who directs Cortland County Area Agency on Aging. Lawrence and Haskins began a correspondence that led to the master passes incentive.

Interested individuals in this age group can obtain a master pass by calling the Area Agency on Aging at 607-753-5060 or Lawrence, at 607-753-4923. The business-card sized, laminated passes also can be picked up at one of Cortland County’s eight senior centers.