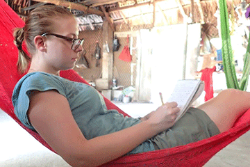 
Many anthropologists have studied the culture of the Maya, Mexico’s indigenous people. Crystal Sheedy ’08 is one of the first women to do it in the ancient Maya language.

In doing so, she found that women of the Maya village of Xocén located in the Yucatán Peninsula of Mexico have developed a special way to communicate to children as a way to keep their traditions strong in the face of the lure of mass culture and city life.

Sheedy, a former sociology/anthropology major at Cortland who is currently a Ph.D. candidate at University at Albany’s Institute for Mesoamerican Studies, will return to her alma mater on Wednesday, Sept. 19, to share her research in a talk titled “An Entrance into Maya Women’s Symbolic World.”

The lecture, at 3 p.m. in Moffett Center, Room 2125, is free and open to the public. Afterward, Sheedy will meet with students interested in pursuing graduate studies in the field.

As a SUNY Cortland undergraduate, Sheedy wanted to study the culture of the Maya and learned the basics of the Maya (Yucatec) language from John R. Sosa, an associate professor in the Sociology/Anthropology Department.

After she graduated from SUNY Cortland with a B.A., Sheedy earned an M.A. at Texas State University-San Marcos in 2011. While enrolled there, she completed three summers of the Yucatec Maya language offered through University of North Carolina and conducted her master’s thesis research in a Maya community in Yucatán.

Ethnography is the systematic study of people and cultures.

According to Sheedy, many changes are happening in the lives of the Xocén residents. Instead of following their parents’ paths, younger generations are now creating their own road by leaving the village to pursue work in cities or tourist epicenters, such as Cancún and Tulum. This has caused dramatic economic and social changes in the village.

“Yet, despite these changes, female residents still strive to raise their children according to a moral framework through the use of their daily speech patterns and routines,” Sheedy said.

The women refer to some of these utterances as u t’àan nukuch máak, “the language of the ancestors” (UTNM), or “dichos” in Spanish (“sayings” in English).

Utilizing a female-centered approach in her SUNY Cortland talk, Sheedy will describe and analyze this genre, which has never been fully documented in the academic record.

“Through this, I will reveal the traditional knowledge contained in these symbols as unique ways of viewing the world for my female participants, as they preserve this knowledge as they transition into more westernized spaces,” Sheedy said.

Sheedy’s past research focused on migration and its effects on the community’s economy and gender roles. Her current work explores how Mayas are preserving their cultural practices and traditions for future generations.