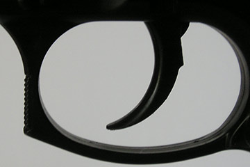 
Amy Thompson, a health educator, author and international presenter on the relationship between public health and gun violence, will speak on Thursday, April 7, at SUNY Cortland.

Thompson, a professor of health education at the University of Toledo, who among many areas of health research has studied guns as a public health risk, will begin at 7 p.m. in Sperry Center, Room 205.

The talk, titled “Armed and Dangerous: the Impact of Guns on Public Health,” represents the ninth Charles N. Poskanzer Lecture sponsored by the College’s Health Department. The lecture is free and open to the campus and community.

The event is supported by the Charles N. Poskanzer Fund, an endowment named in honor of the late SUNY Distinguished Service Professor emeritus who taught in the College’s Health Department for 40 years.

Among diverse research topics, Thompson has focused attention on firearms including gun violence inside schools, psychiatric residency directors’ perceptions of firearm access by the mentally ill in the U.S., and university presidents’ perceptions and practices regarding the carrying of concealed handguns on college campuses.

She co-authored articles on the subject for publication in periodicals including Journal of Community Health and Journal of American College Health.

Thompson has addressed international health educators on the subject at conferences in San Pao, Brazil, and Montreal, Canada; and national audiences at professional gatherings.

From May 2002 to August 2003, she served as director of education and research for the Ohio Coalition Against Gun Violence. She was responsible for coordinating educational programming and research related projects and for organizational advocacy activities.

Thompson founded in 2013 and directs the Center for Health and Successful Living, the first of its kind interdisciplinary chronic disease center focusing on community engagement and student learning and retention.

Thompson was honored as the 2013 National Health Education Advocate of the Year and as a 2015 University of Toledo Cultural Ambassador. She is an honorary member and the immediate past president of the national health association in her field, National Eta Sigma Gamma.

The Poskanzer Fund was established through the Cortland College Foundation as an endowment to support an annual, public lecture offered by the College’s Health Department in honor of its former colleague. Since Poskanzer’s death in 2010, the fund has continued to grow through donations made in his memory. The Poskanzer Lecture allows the Health Department to bring national leaders in public and community health to campus to meet with students and faculty and to deliver a public lecture on a current public health issue.

For more information on the Poskanzer Lecture, contact Al Sofalvi, assistant professor of health, at 607-753-2980.