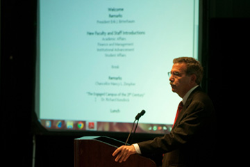 Three themes framed the president’s hour-long remarks to faculty and staff members in the Corey Union Function Room: good news from the past several months, the changing demographic profiles of the student body and the uncertain outlook created by shrinking state and federal funding.

“What you want to happen to someone in college is to be transformed, and I do believe that’s happening here,” said Bitterbaum, who opened his talk by reading letters of thanks and praise from the parents of recent graduates. “I’ve always known that we produce a first-rate student, and there’s no doubt in my mind it’s due in large part to your work.”

He called attention to the most recent data from the National Survey of Student Engagement, which measures student feedback on the overall college experience as well as students’ thoughts about how effectively the College developed their skills in areas such as thinking critically, working effectively with others and acquiring job- or work-related knowledge.

The State University of New York as a system compared favorably to other state institutions across the country. The College, however, did even better. SUNY Cortland achieved satisfaction ratings from both first-year and senior undergraduates that exceeded the SUNY average, especially when seniors were asked if they’d be likely to choose SUNY Cortland again.

The other highlights the president shared included:

“These are all things we should be proud about,” Bitterbaum said.

The president’s update on campus construction reported that Phase II of the College’s three-phase electrical infrastructure project was successful. Additionally, the renovation of outdoor tennis and basketball courts plus the installation of a new 50-space parking lot near the Student Life Center should be completed in the next two weeks.

Bitterbaum also announced eight awards for external grant funding that represented all three academic schools, as well as a predictive salary model the College has established to help guide future compensation decisions. Over the next four years, the College will ensure that salaries for faculty and staff members are in line with other comprehensive colleges of the same size.

Expected budget concerns, however, will require brainstorming new ways to bring in funds. SUNY’s current rational tuition policy, which has ensured annual increases of no more than $300 for resident undergraduates at four-year schools, ended this year, and no new state funding has been approved.

“We’re going to have to start economizing,” Bitterbaum said. “If you follow the national news in other states such as Georgia and Wisconsin, it’s very disconcerting.”

Although SUNY Cortland received more than 11,000 applications last year, attracting and retaining quality students remain top priorities given the stagnant number of high school graduates in the Northeast, Bitterbaum said. Following the president’s talk and the introduction of new faculty and staff members, a discussion of enrollment and retention was led by a panel that included Abby Thomas, director of advisement and transition; Carol Van Der Karr, associate provost of academic affairs; and Mark Yacavone ’94, assistant vice president of enrollment management.

“We as a staff have to be prepared for a unique generation yet to come,” Bitterbaum said while discussing future students’ needs — everything from academics to mental health services.

He shared meaningful student feedback to close his talk and reminded the audience of the College’s strategic priorities: academic excellence, transformational education, maximizing resources and well-being.

“Well-being for me is about reaching one’s human potential,” President Bitterbaum said. “It’s about not only growing intellectually but growing socially, emotionally, physically and spiritually. We do it through a series of challenges and supports … and it reverberates in your work with our students.

“Reaching that human potential is what I believe we’re all about.”