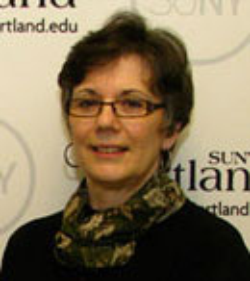 The employees, who are among 51 individuals to be recognized for their terms of service at the College at 11:30 a.m. in the Corey Union Function Room, are Wendy Fairchild, for 35 years of service, and Mavis Lefever, John Reynolds, Patrick Stack and Sharon Tucker for 30 years of service.

Wendy Fairchild started with SUNY Cortland in 1976 as a stenographer in the Admissions Office. In April 1982 she was promoted to senior stenographer and, in December of that year, she was reclassified to

Mavis Lefever joined SUNY Cortland’s College Union/Student Activities in July 1981 as a stenographer. She was promoted to senior stenographer in 1984 and reclassified to secretary I in October 1989. The office is now called Campus Activities and Corey Union.

Sharon Tucker started her career at the College in 1980 as a typist in Custodial Services. She accepted a promotion to senior typist in 1983 in the Art Department and Video Utilization Department. In 1985, she was again promoted to senior stenographer in the Graduate and Continuing Education Department. In 1989, she was reclassified to secretary I. In January 1993, she transferred to the President’s Office and later that year transferred to the Music Department, which became known as the Performing Arts Department in 1997.