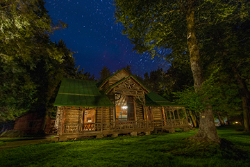 
For people who wonder what it’s like to vacation as a billionaire, a nationally-recognized SUNY Cortland history program can help.

“Forever Wild,” a weeklong immersive experience for K-12 educators, reveals the historical importance of the Adirondack wilderness during the Gilded Age and Progressive Era, including how the wealthiest Americans from bustling cities made use of the natural landscape during the late 19th and early 20th centuries.

The program recently earned a new round of funding from the National Endowment for the Humanities (NEH) as one of the organization’s Landmarks of American History and Culture Workshops. It will continue to rely on the College’s William H. Parks Family Center for Environmental and Outdoor Education in Raquette Lake, N.Y., as a central teaching tool.

“This is a great honor for the College,” said Professor Randi Storch, a project director along with Associate Professor Kevin Sheets. “We’ve noticed that these programs have grown a lot more competitive for funding, so this just shows that our institution is out there doing interesting work, connecting to teachers and our larger community.”

The project extends an impressive stretch between SUNY Cortland’s History Department and the NEH. Since 2012, variations of the “Forever Wild” program have earned more than $900,000 from five NEH grants. An award of $165,198 will fund two weeks of the program in summer 2019.

Full- and part-time teachers in the humanities, as well as librarians, are encouraged to apply for the program, which takes place from mid to late July. Two groups of 36 high-achieving teachers will be selected, and each will spend a day in Cortland before traveling to the Adirondacks for a weeklong stay. Participants receive a $1,200 stipend to help pay for their travel to Cortland and modest lodging expenses during the week.

More information can be found online.

The goal is to introduce teachers to the fascinating relationship between the urban and wilderness environments during the Gilded Age and Progressive Era, periods that cover the 1870s to the early 1920s. In many social studies classrooms, lessons on those years mostly concern the rise of the industrial city. But the importance of the wilderness, especially the Adirondacks, to business, cultural expression and leisure should not be overlooked.

The “Forever Wild” experience was transformative in several ways for Caitlin Goodwin ’11, M.S.Ed. ’16, a middle-school social studies teacher in the McGraw (N.Y.) Central School District. She joined the inaugural cohort of teachers in 2013, early in her teaching career.

Prior to the trip, classroom discussions about the Adirondack wilderness were limited to former President Theodore Roosevelt and his preservation efforts. But after “Forever Wild,” Goodwin said she reworked her narrative, teaching students that the city of Cortland existed as a microcosm of the Gilded Age.

“As a local teacher, the program helped me make a deeper connection with my students,” said Goodwin, noting that the Wickwire Brothers’ wire drawing mill, immigration patterns and the importance of the railroad are topics that often come up.

The “Forever Wild” program’s first day takes place in Cortland so that participants can set the scene from a local urban perspective. Then, the group travels three hours north and stays at SUNY Cortland’s Camp Huntington, which was built by William West Durant as Camp Pine Knot — the first Great Camp of the Adirondacks — and later sold to railroad magnate Collis P. Huntington.

During their wilderness retreat, participants examine primary source documents at the Adirondack Experience on Blue Mountain Lake, which Storch describes as a world-class museum. Educators also learn from guest lecturers representing different academic interests related to the time period. Additions in 2019 will include a pedagogy specialist to discuss historical thinking skills as well as a scholar to explain the Native American experience in the Adirondacks during the Gilded Age and Progressive Era.

Participants even enjoy a seaplane ride to help visualize the vast extent of the Adirondacks.

“All NEH programs do a great job, but none are as unique as staying at Raquette Lake,” Goodwin said. “Many times, you’re in a hotel. (Camp Huntington) lends itself perfectly to the study of place.”

“Forever Wild” was Goodwin’s first taste of professional development through the NEH, and she has participated in six seminars since then, learning more about Benjamin Franklin in Philadelphia, the Transcontinental Railroad in Sacramento and Abraham Lincoln at Ford’s Theatre in Washington, D.C.

“Getting involved with that first program afforded me an incredible amount of opportunity,” said Goodwin, who went on to become a National Oratory Fellow at Ford’s Theatre thanks to her NEH ties.

In many ways, the “Forever Wild” program represents a larger effort across SUNY Cortland’s History Department to convey the historical importance of the College’s outdoor education facilities to students, alumni and the public at large. History majors, for instance, can take a one-credit experiential learning course that involves a weekend retreat to the Adirondacks, where they learn about the importance of Camp Huntington, historical thinking skills and elements of place-based learning.

“We use Raquette Lake as a place where our students can think about public history as a potential career path,” Storch said. “All of it is very much connected to the work we do with ‘Forever Wild’ and the NEH.”