SUNY Cortland to Address Sexual Assault from the Start 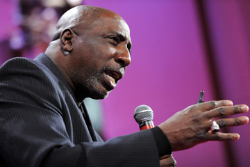 
Professional sports leagues from the NFL to the NBA have leaned on Tony Porter to shape their sexual assault policies and prevention efforts. On Saturday, the lecturer will speak to SUNY Cortland students about sexual violence as part of an ongoing campus awareness program.

His message, aimed primarily at the young men in the audience, may surprise some of them: preventing sexual assault is ultimately up to them.

“It's time for those of us who are good men to start acknowledging the role that male socialization plays in domestic and sexual violence,” Porter said in a recent CNN interview. “As good men, we must begin to acknowledge and own our responsibility to be part of the solution to ending violence against women and girls.”

Porter, who co-founded A Call to Men: The Next Generation of Manhood, a non-profit organization committed to ending violence against women, will offer two talks in the Corey Union Function Room at 1 and 3:30 p.m. All of SUNY Cortland’s first-year students are required to attend.

The event is the opening round of a yearlong communication campaign to educate students about sexual abuse and create a campus culture based on mutual respect and communication.

Nationwide, studies suggest that one out of every five women experiences sexual assault during college, and that the riskiest time for women is during the first few months of school. At SUNY Cortland, almost all reported sexual assaults involve alcohol use and involve people who previously knew each other.

The College has joined countless other campuses and organizations in adopting the slogan “It’s On Us,” joining a national effort that encourages bystanders to intervene before non-consensual sex occurs. More than 400 SUNY Cortland students signed an online petition in support of the campaign during a two-day period last spring.

Porter will bring to Cortland more than 20 years of experience working on social justice causes. His national non-profit, A Call to Men: The Next Generation of Manhood, has earned a reputation for taking a stand against domestic violence and sexual assault by persuading men to change the way they view women. Currently, male culture tacitly supports unequal and disrespectful treatment of women, he said. When that changes, the nation’s sexual abuse epidemic will slowly die.

“We must educate and re-educate our sons and other young men. “We must accept our responsibility that domestic violence won’t end until well-meaning men become part of the solution. While a criminal justice response to domestic violence is necessary, a cultural, social shift is required.”

Porter’s work also has generated many unique training and consulting opportunities with the NFL, NBA and MLB. He has also advised the United Nations Commission on the Status of Women and script writers from “Law & Order: Special Victims Unit.”

Porter has worked with both the U.S. Military Academy at West Point and the U.S. Naval Academy at Annapolis and has traveled as a lecturer for the U.S. State Department to Brazil, India and several countries in Africa. His TEDWomen talk from 2010, in which he encourages men to break free of the “man box,” has been viewed nearly 2 million times.

For more information, contact Cynthia Lake, the associate director of residence life and housing, at 607-753-5414.