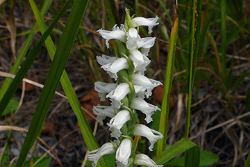 
Many people associate the delicate orchid with tropical rainforests in exotic locales.

Not SUNY Cortland botanist Michael Hough. Recently, he discovered a new species of orchid in the wetlands surrounding a polluted lake near Syracuse, N.Y., one of the snowiest urban areas in the United States.

Last month, Hough and a collaborator announced the discovery of the first native New York orchid to be identified in many years in a paper published in The Native Orchid Conference Journal. The discovery, in the genus Spiranthes, is a north American perennial informally called “Ladies’-tresses,” which is part of the orchid family.

The patch of the previously unidentified Spiranthes, with its single spikes of spiraling, curly white flowers, was sitting in one of the many marshy areas near Onondaga Lake, a federal Superfund site less than an hour’s drive north of Cortland.

“We went over the whole state collecting things, and this is one of the last places that we checked,” said Hough, referring to his field work with Matthew Young, a songbird researcher at the Cornell Lab of Ornithology who is also president and founder of the Native Orchid Conservation Network.

“It is difficult to describe but has characteristics of two other species,” Hough said of the orchid. “It grows in dry, open, acidic habitats and has somewhat yellowish flowers, but is otherwise very similar to other members of the genus. It is often necessary to dissect the flowers to confirm the identity with confidence. Many members of the genus Spiranthes are referred to as ‘cryptic species’ because they superficially look alike.

“And we saw this orchid and decided, ‘This didn’t look like anything else,’” Hough said.

Hough and Young carefully picked several of the stalks and their ring of leaves, leaving behind the roots so the plant can continue to grow in that spot.

A few of the pieces were used for laboratory testing at Cortland and DNA analysis at Cornell University. The rest became part of the Cort Herbarium. Begun in 1908, the university’s Bowers Hall herbarium is a massive physical and online collection of preserved and described plants and fungi and is tied into international online herbariums.

“We did the genetics on it and it turned out to be something new,” Hough said.

Hough and Young then consulted iNaturalist, a crowdsourcing science site that collects identifying information from citizens about the locations of plants and animals. They found pictures of the same-looking plant found across Pennsylvania and Ohio and wrapping the Great Lakes, around Indiana and Illinois.

They then looked back to a 1982 paper by Charles Sheviak, who was with the New York State Museum, and saw illustrations of what appeared to be the same plant. Sheviak had not conclusively identified it as a news species, and therefore had not given it a name.

So Hough and Young readily landed on a name for the new plant: Spiranthes sheviakii.

It was the first new, native orchid species Hough had ever identified, but finding unique plants in unexpected places is almost routine for the Cortland Biological Sciences Department lecturer and author of the 2019 field guide, Flora of Cortland and Onondaga Counties, New York. He finds new plant species and hybrids — the latter combining in nature two different parent species — near parking lots, former bowling alleys and environmentally degraded lakes. He spots them in Cortland’s Durkee Park and off the eastern Syracuse metropolitan area’s Erie Boulevard.

“There used to be a place called Tamarack Swamp, which was a northern White cedar swamp loaded with rare species,” said Hough. “Now it’s pavement, they literally paved over the swamp, but there’s still these little remnants of the fens and things that used to occur in that area,” he said of the flora he spotted near Syracuse’s major thoroughfare.

In Durkee Park, he spotted and named the hybrid of a modestly flowering native plant called a Geum. He named it after the city: Geum x cortlandicum.

More recently, his co-authored article about his identification of a long known but previously unnamed Geum hybrid, Geum x hainesianum, is set to appear in a 2021 edition of the journal Rhodora.

In October, Hough was interviewed by the Syracuse Post-Standard for a story about a fragrant orchid found near Onondaga Lake that is common in the American southeast but had never been seen in New York. In fact, the nearest known place where it grew wild was 350 miles south. Spiranthes odorata’s relatively gigantic height, up to 3 feet, and the somewhat vanilla smell emanating from its flowers set apart this mainly southeastern growing species. Another researcher, Joseph McMullen, in 2014 had discovered the mystery Ladies’ tresses orchid. McMullen, Hough and Young recently worked together to identify the plant formerly only seen as far north as Delaware.

“We actually have quite a diversity of orchids around here,” Hough said. “Onondaga County, orchid diversity is one of the things it was known for. We’ve lost two or three of them, so that’s one of the exciting things about finding these, because now there’s a new one.”

Hough posts his findings on the New York Flora Association Blog and maintains his own blog called Plants of the Northeastern United States.

“It’s the whole reason I went to college and went back to college,” said Hough, a graduate with his M.S. in plant ecology from the SUNY College of Environmental Science and Forestry. “I wanted to learn about plants. I was interested in identification and naming them. I get excited about it because it’s neat.”