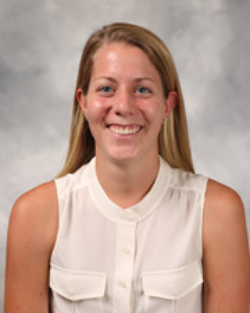 Lawrence earned a bachelor’s degree in physical education from Cortland in 2012 and a master’s degree in sport management in 2014. She worked during the 2013-14 school year as an athletic operations intern at Cornell University, where she managed home competitions and scheduled facilities, event staff and officials. In addition, she served as a volunteer assistant coach with Cortland’s women’s volleyball team in 2013-14 and completed an independent work study position in the State University of New York Athletic Conference (SUNYAC) office in the spring of 2013.

From 2008-11, Lawrence was a member of Cortland’s volleyball squad that posted a combined 131-33 record and won two SUNYAC titles. As a captain in her senior year she led the Red Dragons in digs as the team advanced to the NCAA Div. III quarterfinals.