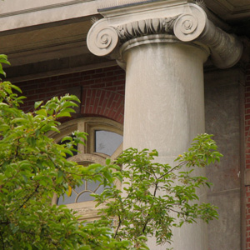 
The State University of New York will award honorary doctoral degrees to two individuals who have earned international recognition in their respective fields during SUNY Cortland’s Undergraduate Commencement ceremonies on Saturday, May 17.

Barbara J. Ryan ’74, an international leader in the field of satellite imaging, and Wang Gongxin, a world renowned video artist, will deliver the Commencement addresses at the 9:30 a.m. and 2:30 p.m. ceremonies respectively.

Both embody SUNY Cortland’s global approach to education and both share unique connections to the College. Ryan earned a bachelor’s degree in geology from SUNY Cortland in 1974 and Gongxin studied as a visiting student at the College in the late 1980s.

Gongxin was a visiting student at SUNY Cortland in 1987 and 1988 and helped inspire the creation of the College’s New Media Design major. Because of his work, avant-garde art in the form of computer-assisted video installations is widely accepted in China, influencing public discussions on social and cultural issues.

Trained in traditional Chinese art forms as well as communist “socialist realism,” Gongxin was challenged by exposure to western, “new media” art as a student in SUNY Cortland’s Art and Art History Department. He explored new mediums of expression and exhibited in the department’s Student Select exhibition in 1988.

Gongxin returned to China, where he became the first Chinese artist to introduce and master computer manipulation of video. His work has been shown at major art exhibitions around the world, earning honors that include the 2006 Martell Artist of the Year and a Lawrence Olivier Award — British Theater’s equivalent of a Tony Award — for best video set design.

Work such as “My Sun” in 2000 questioned established political and social norms, exploring the rise of individualism in China and focusing on the subtleties of everyday life. “Here? Or There?” a collaboration with his wife, acclaimed artist Lin Tianmiao, reflects the uncertainty caused by fast-paced growth and change in modern China with images that shift between reality and fantasy.

Video installations such as “Rain, or Water,” a piece highlighting water conservation commissioned by the Beijing Center for Contemporary Art as part of its Green Art Project, demonstrate Gongxin’s commitment to creating a sustainable planet.

By merging western influences with traditional Chinese culture, Gongxin has created a body of work that is visually stunning, emotionally gripping and intellectually stimulating.

Ryan, the secretariat director of the intergovernmental Group on Earth Observations (GEO) in Geneva, Switzerland, will receive an honorary Doctor of Science degree.

Under Ryan’s direction, millions of satellite images have been made available to the general public at no charge, allowing scientists, planners and policy makers to take a comprehensive approach to problems that transcend political boundaries. Her work addresses critical issues in agriculture, public health, disaster planning, energy, bio-diversity and climate change.

After graduating from SUNY Cortland with a degree in geology in 1974, Ryan joined the United States Geological Survey (USGS), the nation’s largest civilian mapping agency. She became an expert in groundwater contamination and eventually was selected as staff assistant to the Department of the Interior’s top official for water and science.

Ryan advanced steadily in the USGS, earning master’s degrees in geography from the University of Denver and in civil engineering from Stanford University along the way. As associate director for geography at the USGS, she was responsible for the Landsat program, which includes the agency’s remote sensing, geography and civilian mapping features.

Ryan has served as chair of the international Committee on Earth Observation Satellites, which coordinates information from more than 100 civilian satellites and in 2008 became director of the World Meteorological Organization’s space program.

Since 2012, in her current role as secretariat director of the GEO, Ryan has worked to pull earth observation systems from around the world into a single, comprehensive system that uses coordinated data to understand how environmental factors impact human life. Like Ryan’s career body of work, the system helps guide decision-makers toward better energy, agricultural and land-use decisions.