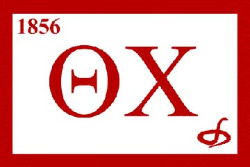 That’s the lesson to be taken from a coin-collection project led by members of a SUNY Cortland fraternity, an effort that raised hundreds of dollars for childhood hunger prevention during the spring semester.

The College’s chapter of Theta Chi collected $312.78 — nearly all of it loose change — in a 12-foot, clear cylinder that symbolizes a giant baby bottle in Corey Union. The money will support Doctors Without Borders, an international medical humanitarian organization that delivers emergency aid to people excluded from healthcare.

Since it was installed in 2006, the cylinder has brought in $1,112.91 for Doctors Without Borders through various service-learning focused courses and other volunteer efforts. The charity earned a Nobel Peace Prize in 1999 and an A rating from several major philanthropy agencies for its work in aiding people affected by armed conflict, illness and natural disasters.

Theta Chi, a social fraternity that took shape at SUNY Cortland in 2013, is founded on the principle of friendship through the mutual assistance of every member. The Greek organization is a major contributor to the annual CROP Hunger Walk each fall. The brothers plan to continue the baby bottle project next spring.