Spring Fling is in the Air! 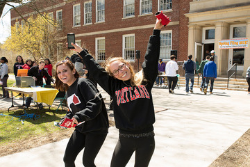 
Young Thug, one of the most unconventional and innovative voices in rap, will headline SUNY Cortland’s annual Spring Fling concert on Saturday, April 29.

The Spring Fling picnic and carnival will be held from noon-3 p.m. on the lawn of Moffett and Old Main. Activities include a zip line, a KAPOW obstacle course, a bungee run and photo booth. Popcorn, cotton candy and sno cones will be available, as will a picnic menu of burgers and veggie burgers, hot dogs, chicken, potatoes, pasta salad, watermelon and lemonade. T-shirts, tank tops, sunglasses, water bottles and cell phone wallets are among the giveaway items.

In case of rain, the picnic and carnival will be held inside at the Corey Union Function Room.

Rapper and record producer A Boogie wit da Hoodie will open the evening concert in the Park Center Alumni Area.

Doors open at 6 p.m. The show starts at 7 p.m. Tickets will be sold at the door. Day-of-show tickets will cost $35 for students and $40 for the general public.

Concert-goers must be at least 18 years old to attend.

Atlanta-based Young Thug burst onto the scene when he began releasing independent mixtapes in 2011. He has since collaborated with rappers such as Waka Flocka Flame, T.I. and Kanye West. Young Thug’s avant-garde vocal style has drawn critical acclaim. Rolling Stone gave Young Thug’s latest effort, Jeffery, four out of five stars and said, “But as usual it's Thug's own sound that predominates: the heroic howls, rasps, mumbles and wheezes of a man who is as captivating a vocalist as any in pop.” Featured in Calvin Klein’s 2016 fall campaign, Young Thug is also a pioneer in the fashion world.

A Boogie wit da Hoodie released his debut mixtape, Artist, in 2016. He opened for Drake and Future on the Summer Sixteen Tour this past summer.