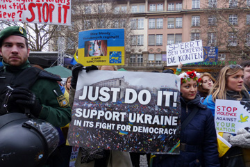 
SUNY Cortland’s Project on Eastern and Central Europe (PECE) continues with two events at the beginning of April aimed at addressing crucial moments in European history — one that analyzes a tragic past and another that looks toward an uncertain and dangerous future.

“The Long Way Home,” an Academy Award-winning documentary that tells the depressing story of Jewish Holocaust survivors as they attempt to rebuild their lives in the wake of World War II, will be screened at 7 p.m. Tuesday, April 7, in Sperry Center, Room 104 as part of the “Rubble Films: Classics of Post-1945 European Cinema” series.

Later in the week, Zenon Wasyliw, a history professor at Ithaca College, offers a lecture titled “The Ukrainian Revolution of Dignity and Ukraine’s Far East” at 4:30 p.m. Thursday, April 9, in Brockway Hall Jacobus Lounge. His talk will examine the current crisis in Ukraine and the tension between Russia and the West, which includes the U.S.

The 1997 film, directed by Mark Jonathan Harris, depicts the post-World War II Jewish refugee situation — from the liberation of concentration camps to the establishment of the modern state of Israel. Although the war had ended, tens of thousands of Jewish refugees who survived the Holocaust struggled through a period of uncertainty from 1945 to 1948, often making illegal attempts to return to Israel.

Wasyliw’s course titles include “The USSR: History and Legacies,” “Global Revolutions in the 20th and 21st Centuries” and “The Other Europe: Modern Eastern and Central Europe.” His several research and publication projects include one on the use of social media in the preparation of pre-service social studies teachers.

He holds bachelor’s, master’s and doctoral degrees from Binghamton University.