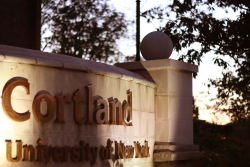 
The main entrances to the home of the Red Dragons were illuminated in orange light the evening of Friday, June 7, to mark National Gun Violence Awareness Day.

Governor Andrew M. Cuomo last week directed a number of state-controlled locations to change the color of some of their exterior lighting to orange. SUNY Cortland supported that effort by lighting its main entrances on Graham Avenue, Tompkins Street and Route 281.

Other New York state buildings that were lit in orange include the State Education and SUNY administration buildings in Albany as well as One World Trade Center in New York City, the Governor Mario M. Cuomo Bridge over the Hudson River between Tarrytown and Nyack, the Entrance Gate and Exposition Building at the Great New York State Fair in Syracuse and landmarks at the following SUNY campuses: Binghamton University, Buffalo State, the College at Brockport, Jefferson Community College and Upstate Medical University.

“Gun violence is an issue that hits particularly close to home at SUNY Cortland,” President Erik J. Bitterbaum said. “We’ve lost beloved alumni to pointless gunfire, ranging from the horrific massacre at Sandy Hook Elementary School to random street violence in New York City. Kyle Richard, who graduated last month, this week testified in the trial of a man who shot him twice after Kyle stopped an attempted rape on Long Island. And Robert Spitzer, one of the world’s leading experts on gun laws, is a respected member of our faculty.”

Friday marked the beginning of Wear Orange Weekend, an initiative of Everytown for Gun Safety that encourages people to wear the color to support anti-gun violence causes. June is Gun Violence Awareness Month.

“Gun Violence Awareness Month elevates our collective consciousness of an issue that has become all too devastating and commonplace,” said SUNY Chancellor Kristina M. Johnson. “Through education and awareness, we must continue to promote the proper use of firearms. I applaud Governor Cuomo for the gun safety laws he has enacted and for raising awareness of a problem that desperately needs our attention.”

More than $13.3 million in state funding has gone toward the Gun Involved Violence Elimination (GIVE) initiative, which uses evidence-based approaches and proven strategies to reduce shootings and save lives. GIVE supports 20 police departments and law enforcement partners in the 17 counties that report the majority of violent crime outside New York City and has contributed to a double-digit decline in shootings in those communities since 2013.

"As senseless acts of gun violence occur with frightening regularity, it is more important than ever to keep this issue front and center and to pressure the federal government to finally do something," Governor Cuomo said. "New York already has some of the strongest gun laws in the nation - now Washington needs to follow suit. I am directing landmarks across the state to be lit orange this evening to mark National Gun Violence Awareness Day."

Although the SUNY Cortland feels the impact of gun violence deeply — Mary Sherlach ’78, a school psychologist at Sandy Hook, was killed while protecting students from a rampaging gunman, and Calvin Louis-Juste ’09 was shot down outside of his grandmother’s house in Brooklyn in a random act of violence — the campus itself is considered the safest in New York state and one of the safest in the entire country, according to a recent analysis of federal crime statistics. The City of Cortland, meanwhile was recognized as the safest college town in New York in 2017.