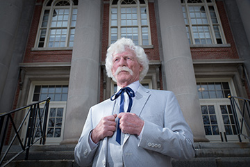 
People frequently tell Ralph Shortell ’66 that he looks a lot like Mark Twain.

In response, Shortell adopts the manner of the 19th century author and humorist and speaks from beneath his flowing white mustache: “The reports of my death are greatly exaggerated.”

Shortell doesn’t have to channel familiar quotes from the American literary icon to make people think of Mark Twain. All he needs to do is show up.

He recalls, for example, the time when he and his family stopped at Woodlawn Cemetery in Elmira, N.Y., to visit the final resting place of Samuel Langhorne Clemens — who was better known by his pen name, Mark Twain.

“We walked out from behind a monument and people gasped, they thought it was the reincarnation of Mark Twain,” said Shortell of Dryden, N.Y., a retired director of student activities and the Student Center at Tompkins Cortland Community College.

Clemens, most famous for works such as The Adventures of Tom Sawyer and Huckleberry Finn, lived from 1835 to 1910. Today, the striking visual similarity between the two has become something Shortell takes pride in: dressing up in Twain’s trademark ivory suit and delivering his famous quotes, all while continuing to learn about Twain’s life and sharing it with others.

On Sept. 17, Shortell won the first ever Mark Twain Look-alike Contest hosted by the Mark Twain House and Museum in Hartford, Conn. He competed against two other Twain look-alikes, dressing up and delivering an attributed Mark Twain quote.

Shortell chose to excerpt part of Twain’s Oct. 12, 1874 speech, given when the humorist and his family lived in that state’s capital:

“Ah…… Hartford…….. a city whose fame as an insurance center has extended to all lands and given us the name of being a quadruple band of brothers working sweetly hand in hand — the Colt Arms Company, making the destruction of our race easy and convenient. Travelers Insurance Company, paying for the victims when they pass away. The fire insurance companies taking care of their hereafter and….. finally the New England Granite Works that perpetuates their memory with stately monuments and statues.”

The panel of judges named Shortell the winner.

Who knew that Shortell — who graduated from SUNY Cortland in 1966 with a B.S. in recreation and received his M.S. in guidance and personnel service from SUNY Brockport in 1971 — would find an enduring pastime in historical reenactment?

In fact he now is working to become a first-person interpreter for Twain, teaching about the author’s life rather than just impersonating him.

“What an impersonator does is what I do now; simply standing around, looking good and talking to people,” Shortell said. “As first-person interpreter you have a much better understanding of the individual, their writings, characteristics and so on.”

Shortell recalls when he first became a fan of Mark Twain, like so many others.

“In fifth grade we were required to read The Adventures of Tom Sawyer but then my interest waned for a few years,” he said.

Years later — when Shortell had grown to look more like Twain — he continued to attend programs similar to “Mark Twain Tonight.” He had front row seats at “Mark Twain: The Musical,” a summertime production hosted by Elmira College.

“The gentleman portraying Twain during his performance came over, looked at me and had to stop because he literally forgot his lines for a moment,” he said.

When Shortell finally attended a meet-and-greet at Holbrook’s 90th birthday party in Hartford, Conn., the actor drew a comparison between the two. Holbrook said that while he spent upwards of three hours applying makeup, his wig and mustache to portray Twain, Shortell merely had to fluff up his hair.

The Mark Twain House and Museum is working with Shortell to portray Twain at future events such as the “Tom Sawyer Days” in June.

He hopes to reenact Twain next Sept. 26 at a planned release of the author’s never-before-published children's book, titled The Purloining of Prince Oleomargarine. The book is based on 16 pages of handwritten notes of bedtime stories Twain told his daughters.

“He would make up a story every night using items on the mantel, always in the order of which he found them,” Shortell said.

When not researching his historical portrayals, Shortell enjoys volunteering, woodworking, traveling and maintaining his three classic cars, including a 1967 Shelby GT350. He has toured Route 66 and along the east coast.