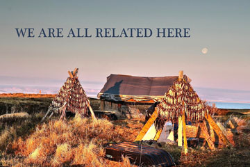 
A documentary that presents the challenges of global warming on Native people will launch SUNY Cortland’s Native American Film Series on Tuesday, Nov. 1.

Presented by the College’s Native American Studies Program, the film series is free and open to the public. “We Are All Related Here” and two additional films will be shown at 7 p.m. on Tuesdays in Sperry Center, Room 205.

In “We Are All Related Here,” director Brian McDermott tells the story of the Yupik people of Newtok, Alaska, who are forced to relocate their village because of the erosion and flooding due to global warming. The 51-minute documentary presents the traditional ways of hunting, fishing and dancing, and the challenges facing this coastal community as they prepare to relocate south to a new site.

“Drunktown’s Finest,” to be shown on Nov. 8, takes place on a Navajo reservation and revolves around three characters. One has been adopted by white parents and is struggling to find her birth family, the second is a transgender woman trying to find acceptance, and the third is trying to do the right thing but continues to get into trouble. The characters all are connected in strange ways. Directed by Sydney Freeland, this film has strong language and nudity. Originally premiered at the Sundance Film Festival, it runs 93 minutes.

The final film, set for Nov. 15, is titled “Songs My Brothers Taught Me.” Directed by  Chloé Zhao and produced by Forest Whitaker, the story is set on the Pine Ridge Reservation and is about the relationship between a small family when the father dies. The son starts running alcohol and bull riding to earn money while fighting the pull of moving away from family to survive. The film explores the bond between him and his younger sister who wants him to stay. The mother is played by Irene Bedard. The film runs 93 minutes.

The series is sponsored by a grant from the Auxiliary Services Corporation, Native American Studies, SUNY Cortland SOGIE and the Center for Gender and Intercultural Studies.