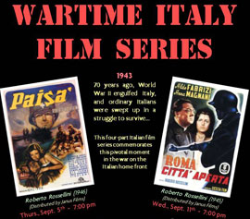 
Continuing its four-part “Wartime Italy” film series, SUNY Cortland will commemorate the 70th anniversary of a pivotal moment for Italy during World War II with three more screenings in September.

Hosted by the College’s Modern Languages Department, the screenings take place at 7 p.m. in Sperry Center, Room 205. They are free and open to the public.

All films are presented in Italian with English subtitles.

The first film in the series was shown on Sept. 5. The three remaining films, and their dates, are:

“Rome, Open City,” 1945, was Roberto Rossellini’s breakout film, and is a harrowing drama about the Nazi occupation of Rome and the brave few who struggled against it.  The Criterion Collection, which recently released the film on DVD, wrote:  “… a shockingly authentic experience, conceived and directed amid the ruin of World War II, with immediacy in every frame. Marking a watershed moment in Italian cinema, this galvanic work garnered awards around the globe and left the beginnings of a new film movement in its wake.”

Winner of the Best Film Award at the David Di Donotello (Italian Academy) Awards 2010, “The Man Who Will Come,” 2009, is a powerful and engrossing drama based on the World War II tragedy known as the Marzabotto Massacre, which confirms director and co-writer Giorgio Diritti as a major filmmaker in contemporary Italian cinema.  Set in a small mountain community near Bologna in the autumn of 1944, the film explores family and community relations and the struggle to survive in the midst of an occupying force and partisan resistance.

Elegant and inspired, “Baciami, piccina” is, by parts, tender love-story, witty road movie and historical drama, set at the time of the crucial moment of Italy’s armistice with the Allies: September 8, 1943. On the eve of this game-changing moment, an honest and reliable policeman sets out to safely escort a prisoner, a flamboyant con man, to Venice, and the policeman’s long standing fiancée joins him. As the group of three board a train bound for Venice, they are unaware that their lives and the fate of their country will change forever. Containing, in equal measure, love, passion, despair, bombings, hunger and death, “Baciami, piccina” embodies a somewhat different, lighter take on the wartime experience. Filmmaker Roberto Cimpanelli produced this film in 2006.

The “Wartime Italy” film series is supported by SUNY Cortland’s Modern Languages and History departments, the Dean of Arts and Sciences and Auxiliary Services Corporation.