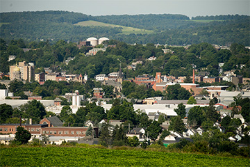 
SUNY Cortland’s commitment to buying local goes beyond using fresh produce in dining halls and supporting community-based businesses. The attitude extends to neighborhoods surrounding the campus, where employees are encouraged to live.

That’s why the College announced that a successful pilot program has been renewed for a second year in 2017-18.

The SUNY Cortland Neighborhood Homeownership Program again will award up to five $4,000 grants to new faculty and staff homeowners who opt to live near campus. Those funds can help pay closing costs or go towards a down payment on a house within defined city boundaries.

“We have amazing faculty and staff members and we want to keep them here — not only to work in Cortland, but to live here too, if their circumstances allow,” said SUNY Cortland President Erik J. Bitterbaum. “This is a wonderful program that rewards our employees for making an investment in the community.”

The program, drawn up by the College’s Live in Cortland Committee, stipulates that award recipients must be full-time employees purchasing a single-family home that serves as their primary residence. Neighborhood boundaries extend from Grant Street in the north to Clinton Avenue in the east to Squires Street in the south to Glenn Street in the west.

All $20,000 of initial funding was awarded within the first six months of the program in 2016, with five faculty and staff members taking full advantage. Three employees were new to the area while two were young professionals who decided to put down roots in the city of Cortland.

Before she accepted a job at the College this past fall, Cathy Cullen consulted the notes that she scribbled down during the interview process, which included a mention of the new homeownership program.

“President Bitterbaum mentioned this program that incentivized employees living in the community and it immediately perked up my ears,” said Cullen, who relocated from Madison, Wis., and now works as the School of Education’s assistant dean for assessment and accreditation. “So when my wife and I came here to search for a house, we knew we wanted to live in Cortland.”

Cullen said she believes strongly in embracing the local community. She taught in Boston public schools before a long career as a college professor and administrator. Living near her students and their families was crucial to her own success in the classroom, she said.

“I knew I could reach them easily, be it in the grocery store or at church,” said Cullen, who purchased a home on William Street. “Being a part of the community made my work more meaningful.”

Likewise, Page Dobbs knew that she and her husband wanted to reside near campus when they moved to Cortland from Springdale, Ark. But they also needed to sell their home in Arkansas and find a home with enough room for their two dogs. The house-hunting process was long and arduous, and it spanned more than six months.

The homeownership stipend came as a much-appreciated bonus.

“When you’re moving 1,200 miles away, it can be stressful because there are so many things in transition,” said Dobbs, an assistant professor of health who now lives on Broadway Avenue. “We were so grateful to receive it.”

Dobbs joked that she appreciates the ability to walk to work in her first year on campus, especially as she acclimates to Central New York winters.

A 2014 SUNY Cortland survey found that many employees wanted to live near campus but only about 30 percent ended up there. Findings also indicated that people who initially rented in Cortland tended to buy houses and stay in the community — investing their time, energy and dollars.

Mary Kate Boland and Jaclyn Lawrence are two examples. Both grew up in Western New York, both graduated from SUNY Cortland — Boland in 2006 and Lawrence in 2012 — and both previously resided in apartments while working at the College. After the homeownership grant was announced, they looked to buy near campus.

“I was considering a few different places, but the award definitely influenced my decision to stay living in Cortland,” said Lawrence, the College’s assistant director of athletics for events, marketing and development. “Applying for it was simple, and it made my first home-buying experience that much easier.”

The hope is that more faculty and staff members, both new and longtime employees, will follow.

Additional Live in Cortland resources include a comprehensive webpage that serves as a helpful guide for newcomers to the community as well as an internal tool to help new employees find suitable rental properties.

To learn more about the homeownership program or other Live in Cortland initiatives, contact committee chair Randi Storch.