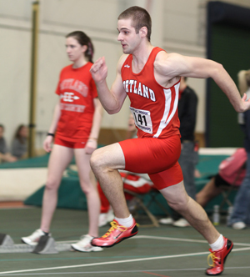 
Filling men’s and women’s sport team rosters becomes a scientific and ethical minefield in light of what now is known about gender, according to a scholar at Northwestern University’s Medical Humanities and Bioethics Program.

Alice Dreger, a professor of clinical medical humanities and bioethics in Northwestern’s Feinberg School of Medicine, visits the campus on Thursday, Sept. 18, to discuss how many sports have historically been divided by gender — man/woman — although we’ve generally pretended the division is by sex — male/female. Many complications have arisen over these preconceptions.

Dreger’s talk, “Who Should Count as a Woman on the Playing Field? The Questions of Intersex and Trans in Sports,” begins at 7 p.m. in Sperry Center, Room 105. Presented by the Biological Sciences Department, the lecture is free and open to the public.

“The more that we learn about gender and sex, the more we know that drawing sex and gender divisions is not so easy,” said Dreger, a historian of medicine and science, a sex researcher, a mainstream writer and a patient advocate.

Dreger, who has served as a consultant with the International Olympic Committee’s Medical Commission on this question, will parse the issues and offer possible solutions.

So what should happen in sports? Dreger’s presentation will explore this question taking into account biology, the nature of sport including the value of fairness and social justice concerns.

Since earning her doctorate in history and philosophy of science from Indiana University, Dreger has released two books published by Harvard University Press, Hermaphrodites and the Medical Invention of Sex and One of Us: Conjoined Twins and the Future of Normal. Her work has received much praise in the mainstream and scholarly literature, with One of Us earning positive reviews in The New Yorker and New England Journal of Medicine. In 2015, Penguin Press will publish her new book, Galileo’s Middle Finger: Heretics, Activists, and the Search for Justice in Science, based on work supported by a Guggenheim Fellowship.

In the medical world, Dreger has served as a patient advocate and a consultant to pediatric specialists undertaking clinical reform, particularly in the treatment of children born with norm-challenging body types, including intersex, conjoined twinning, facial anomalies and short stature. Starting in 1998, Dreger served for five years as the chair of the Board of Directors of the Intersex Society of North America (ISNA), and later as its director of medical education.

She coordinated and edited the first two national medical consensus documents on the care of children born with sex anomalies, texts now widely cited in the medical literature.

In 2011, UTNE Reader named Dreger a visionary for her work on intersex. The same year, TED released her talk, “Is Anatomy Destiny?” in the “Sex, Secrets & Love Netflix” compilation that also included John Hodgman and Mary Roach. At the TED website, Dreger’s lecture has been viewed more than 880,000 times. She also has appeared as a guest expert on Oprah, Savage Love, Good Morning America, and NPR, and in many original documentaries for network that include A&E, ABC, Discovery, PBS and HBO.

Event sponsors, in addition to the Biological Sciences Department, include the Center for Ethics, Peace and Social Justice; the Center for Gender and Intercultural Studies; the Multicultural Life and Diversity Office; the LGBTQ Committee; the Campus Artist and Lecture Series; the Cultural and Intellectual Climate Committee; and the departments of History, and Recreation, Parks and Leisure Studies.