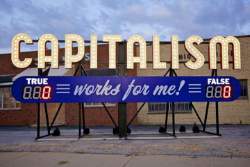 
It’s a straightforward question about a taboo topic. And it’s being asked by a unique outdoor art installation at SUNY Cortland’s Dowd Gallery.

Does capitalism work in your life?

People walking near the College’s Dowd Fine Arts Center will be able to answer ‘yes’ or ‘no’ simply by pressing a button, although the exhibition attempts to dig deeper for insight.

“Capitalism Works for Me! True or False,” an interactive piece created by contemporary artist Steve Lambert, will be on display outdoors Tuesday, April 21, through Friday, May 8, under the Dowd Gallery window overhang. People will be able to vote from the sidewalk near Moffett Center from 10 a.m. to 6 p.m. Monday through Friday.

“We’re excited about the potential the piece has to engage our students in a fun way to think more deeply about capitalism — a system many of them may not be accustomed to questioning — and the complex impact it and other systems have on humanity and the planet,” said Erika Fowler-Decatur, director of the Dowd Gallery.

“We had a discussion in our department about how to engage a more critical conversation about capitalism,” Krall said. “(The exhibition) seems like such a simple idea, but it has the potential to get some interesting conversation going about a subject that’s usually off limits to talk about.”

Lambert’s aluminum and electrical display, which measures nine feet tall and 20 feet wide, began its international exhibition tour in 2011. It has appeared in museums and galleries from Boston to Los Angeles and it recently showed up in Times Square.

“Start a conversation about capitalism and friends edge away slowly, and strangers even faster,” Lambert writes in a project description on his website. “This is what art is for.

“This is what art does well. It creates a space where new ideas and perspectives can be explored. A space unlike any other.”

At SUNY Cortland, the outdoor installation will bring together students from multiple fields of study. For example, the College’s Economics Club and Art Exhibition Association will encourage interaction with the piece and thoughtful discussion throughout its three-week display.

“It’s an inter-disciplinary project that has the potential to engage students and faculty across disciplines,” Krall said.

Lambert’s description of his work suggests people have a right to question the U.S. economic model, specifically whether or not the system works for them.

“We have a cultural disposition that directly correlates capitalism and freedom, so we sometimes feel that if we question the system in any way, we’re on the road to ruin,” Krall said. “There are ideological reasons why capitalism is a subject that seems off limits, and this exhibit, in its simplicity, has the potential to engage a taboo conversation.”

Funding to bring the installation exhibition was provided by the Dowd Gallery, a Campus Artist and Lecture Series grant, the Art Exhibition Association, the Economics Club and an anonymous donor.

For more information on the exhibition, contact Fowler-Decatur at 607-753-2285 or erika.fowler-decatur@cortland.edu.