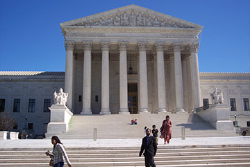 
SUNY Cortland political scientist Timothy Delaune will analyze the great societal shift that is represented by the legalization of same-sex marriage, Wednesday, March 9, at the College.

Preceding the talk, a reception will be held at 4 p.m. in the Rozanne M. Brooks Museum, Moffett Center, Room 2126.

The presentation, which is free and open to the public, continues this year’s 2015-16 Rozanne M. Brooks Lecture theme “The Culture of Thought.” The series engages audience members in exploring what has shaped, and is changing, the way humans think about the world around them.

Through tracing the evolution of thought in same-sex marriage, Delaune will justify how the process came to be taken more seriously in the U.S. Supreme Court. His primary focus is on the key to what changed people’s thinking in becoming more tolerant of same-sex relationships.

“People’s thinking changing was a pre-requisite, a necessity in order for the law to change,” Delaune said.

In his talk, Delaune will explore the speed at which same-sex relationships and legal marriage happened compared to other social opportunities.

“The explanation in my view for why it was possible for the court to reach its decision, even though it was a close decision, was in part the changing views of the individuals on the court,” Delaune said.

According to Delaune, the phrase “learning to see injustice,” a concept from Justice Anthony Kennedy’s opinion in the Supreme Court ruling, means learning to shift views. During his talk, Delaune will be looking into the different explanations for why individuals’ views changed and how the views of the court changed.

Delaune also will touch upon society’s willingness to question and not hold on to facts.

“If it weren’t for our willingness to question assumptions, the culture of thought would never change,” Delaune said.

At the College, he has participated in a Fall 2013 panel discussion on being an effective ally to members of the LBGTQ community and serves as a member of the SUNY Cortland LBGTQ Faculty and Staff Committee.

The 2015-16 Brooks Lecture Series is sponsored by a grant from Auxiliary Services Corporation and the Cortland College Foundation.