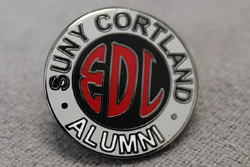 
SUNY Cortland alumni who earned their Certificate of Advanced Studies (C.A.S.) experience many of the same things during their Cortland career.

These school principals and superintendents who earned their credential from the School of Education’s Educational Administration or Education Leadership programs have formed strong bonds and memories, perhaps about car-pooling together through blizzards in some instances to attend classes on the main campus. Or completing their administrative internship in the same district. Or juggling academic challenges with teaching responsibilities and raising a family.

But typically for these post-graduate scholars, those common threads happen away from one another and largely off the main campus.

But now everyone who graduated with the C.A.S. credential can connect socially and professionally through a newly created association.

The Educational Leadership Alumni Association (EDL) was chartered and officers appointed during the recent Alumni Reunion 2018 weekend, July 12-15, by a dedicated group of graduates currently working as school administrators.

“What I’m so excited about is the prospective networking: ‘Yeah, I know that person’,” said Steve Zielinski M ’99, C.A.S. ’07, to the committee members present at the meeting in Park Center Alumni Arena. Zielinski, the superintendent at the South Seneca (N.Y.) district, was voted in as president of the new organization.

“We’re already at this table meeting some new people and that will continue,” he said. “I’m very excited about forming this and seeing what kind of network we can build. Many of us are already doing the work in this state and influencing thousands of students.”

Eligibility for membership in the organization is automatic upon conferral of the credential.

Alumni who earned their C.A.S. may log into the SUNY Cortland Alumni Association’s Red Dragon Network and update their personal information to join their cohort. Once signed in, members will receive text and email messages about upcoming events and news announcements.

The group has its own EDL alumni lapel pin so members can pick one another out of the crowd at future alumni association events or interscholastic professional meetings. These will be distributed at alumni gatherings.

In one sense the timing for creating this new networking group couldn’t be better. For 150 years, SUNY Cortland has been educating the state’s — and the nation’s — teachers, and this year’s Alumni Reunion 2018 also served to kick off the College’s sesquicentennial.

The sesquicentennial also marks smaller milestones, such as this year’s 45-year anniversary of the College preparing secondary educational administrators. The latter group now has representatives in leadership roles in many districts and is more than ready to proudly stand out among their educational peers.

Fittingly, the secondary school chiefs met to charter the association followed the conclusion of the College’s 10th annual Francis J. Cheney Educational Leadership Institute on July 13, an event designed to foster leadership skills that annually attracts approximately 125 school administrators from Central New York. The conference is named after Francis J. Cheney, who served as Cortland Normal School principal from 1891 until his death in 1912.

“The group does not yet have a plan for moving forward other than establishing a network of EDL alumni to promote new graduates’ mentoring and job opportunities,” said Manaseri, who will represent the alumni who are retired administrators.

“We do anticipate that there will be social gatherings of (Cortland) EDL alumni at various state-wide conferences for superintendents, principals, CSE Chairs, ADs, etc.,” Manaseri said. “SUNY Cortland is proud to play host to school leaders from across Central New York and the Mohawk Valley, a number of whom are graduates who earned the Educational Leadership Program’s C.A.S.”

Committee members expressed a strong need for the kinds of high level networking planned by the EDL Association to help each other grow as professionals.

Zielinski noted how a past chair of the program, Kevin Mack, had offered the C.A.S. candidates very similar advice to what the Cheney Conference 2018 keynote speaker, international education guru George Couros, had had to say earlier that day.

“He recommended that we take a video of our (internship placement) classes, and you had to watch excerpts from the video,” Zielinski said. “(Mack) said, ‘You might think you might not be able to do that, what you see on the video. But if you can’t figure it out, maybe administration is not right for you.’”

Zielinski added that in order to succeed, alumni had to shift their mindsets from when they were teachers because the buck stops at the school administrator’s desk.

“We are the ones doing the work, and we have to be proactive and do our own work,” he said.

“I am honored to serve on this valuable committee, as I feel it is a wonderful way to stay connected, build alliances, and give back to a program that has afforded me endless opportunities,” said the committee’s new secretary-treasurer Tracy Durkee ’90, M ’95, C.A.S. ’17, the principal at Morrisville-Eaton (N.Y.) High School, after the July 13 meeting.

Committee members also will include: