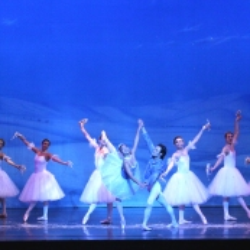 
Three different casts, each with more than 100 dancers, will be featured in three performances of the Christmas classic and perennial favorite, “The Nutcracker Ballet.”

The show will be presented at 6 p.m. on Friday, Dec. 7, and at 1 and 6 p.m. on Saturday, Dec. 8, in the Bonne Auditorium at Homer Intermediate School.

Tickets will be available at the door, and are $10 for children and students, $14 for seniors, and $17 for general admission.

The ballet premiered in Russia in 1892 and is based on the story “The Nutcracker and the King of Mice,” written by E.T.A. Hoffman and revised by Alexander Dumas, with a score by Pyotr Illyich Tchaikovsky. It gained popularity in the U.S. during the 1960s, and has become a staple of many ballet companies, especially during the Christmas season. The performances at Bonne Auditorium will mark the fourth season that the ballet has been presented locally under the artistic guidance of the Halpins.

Previously, the Nutcracker has been staged at Dowd Fine Arts Center Theatre on the SUNY Cortland campus. That facility is currently unavailable due to renovations, and Bonne Auditorium was selected as the alternate venue.

According to Kevin Halpin, associate professor of performing arts, changing locations has offered new opportunities in ways to present the ballet.

“We have kept as much of our traditional staging as possible,” Halpin said. “We added one new variation, and re-choreographed some of the other pieces to highlight the particular talents of this cast.”

The husband-and-wife team has developed specific choreography for each scene, with either Kevin or Cindy taking the lead while the other one works out the partnering or develops particular steps or combinations. The Party Scene is a good example of how the two of them divide their duties to manage as many as 50 people on stage at the same time. In that scene, young PAI dancers perform as children and as some of the magic dolls, and college students fill the roles of the adult characters. Kevin Halpin explained how he and Cindy collaborated on the choreography.

While it is easy to see the on-stage results of talented, well-rehearsed performers, the Halpins are quick to praise the unseen backstage staff members who help secure and manage the cast, as well as the technical staff that create and run the technical aspects of the show. Each production also requires a great deal of planning, fine-tuning of schedules and communicating with parents and students. It takes a tremendous commitment by everyone involved, and, year after year, the cast, crew, and audience discover that “The Nutcracker” is definitely worth the effort.

“Our “Nutcracker” is a wonderful opportunity for the College and community to interact,” Kevin Halpin said. “The energy and passion shared by performers from SUNY Cortland and the Performing Arts Institute make the experience unforgettable for all the dancers.”