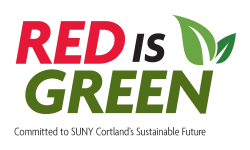 
SUNY Cortland is among 21 public and private colleges in New York that have formed a consortium to buy energy and renewable energy credits from new, large-scale renewable energy projects in the state.

“This innovative and cooperative approach will help colleges across the state reach their sustainability goals and strengthen SUNY Cortland’s reputation as one of the greenest campuses in the nation,” President Erik J. Bitterbaum said. “It will enable us to make more efficient use of both our energy and financial resources.”

The SUNY-led consortium is in the process of hiring a consultant to help all member campuses negotiate power purchase agreements that would supply each campus with energy from a large renewable project. In all, the group is seeking a commitment for 150,000 megawatt hours of “green” energy a year. That’s enough electricity to power a small city.

The consultant would also seek proposals for large-scale producers of sustainable energy to meet the 64-campus SUNY system’s annual 1.3 million megawatt-hour demand. NYCARES hopes the size of the commitments will spur development of renewable energy projects in the regions surrounding the campuses.

Those projects are needed to help the state meet its goal of raising the renewable energy component of the state’s electrical grid to 50 percent by 2030.

Since 2011, SUNY Cortland has been aggressively pursuing a course aimed at reducing greenhouse gas emissions and becoming carbon neutral by 2050. In 2015, Cortland became the first SUNY campus to commit to using 100 percent renewable electricity. Although there are thousands of solar panels operating on campus, much of that goal was achieved by buying green energy “credits” that subsidized the development of renewable energy in New York.

SUNY Chancellor Kristina Johnson said she would like all SUNY campuses to reach 100 percent renewable electricity as soon as possible, and sees the consortium as a way to move things forward more quickly.

"The recent U.N. report increases the urgency, so for those of us who can, we have to do something," Johnson said. "First, let's decarbonize electricity - it should be an easy lift, plus it will give a market signal for renewable energy."

In addition to positively changing the regional renewable energy market, NYCARES aspires to advance each college’s academic mission by powering the campuses in a way that is both financially viable and environmentally conscious.

SUNY Cortland is on NYCARES’ steering committee, along with Cornell University, Ithaca College, Binghamton University, the University at Albany, SUNY Purchase and Hudson Valley Community College. The initiative is coordinated by SUNY administration.

This past summer, The Sierra Club named SUNY Cortland to its annual “Cool Schools” list of the nation’s most environmentally friendly schools for the third consecutive year. The College was also recognized by the Association for the Advancement of Sustainability in Higher Education (AASHE) for excellence, and named both a pollinator-friendly campus and a tree campus by national environmental organizations.