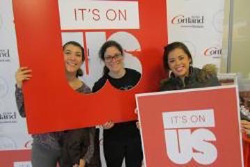 
April is national Sexual Assault Awareness Month, and SUNY Cortland will host a full schedule of educational events and opportunities to raise awareness and show support for the many survivors of sexual and domestic violence.

The events started Monday with a Week of Action that includes “It’s On Us” T-shirt giveaways, the annual Take Back the Night March and a Green Dot campus egg hunt. It is followed by a workshop on relationship violence, a Wellness Wednesday panel on supporting survivors of sexual assault, and a presentation by an investigative sports journalist who has written extensively about rape and sexual assault in athletics. On April 30, the College will participate in Yards for Yeardley, a fundraising challenge named after a University of Virginia athlete who was violently killed by an ex-boyfriend.

Also, during the first three weeks of April, SUNY Cortland President Erik Bitterbaum is urging all members of the SUNY Cortland community to participate in a confidential sexual violence prevention survey aimed at helping the College improve its efforts against all forms of sexual assault.

Nationally, researchers estimate 1 in 5 college women experience some form of sexual assault before graduation. The same is true for 1 in every 16 college men.

“Having a variety of events throughout Sexual Assault Awareness Month is important to encourage many of us on campus to work toward positive culture change,” said Nan Pasquarello, SUNY Cortland’s Title IX coordinator. “The statistics around sexual and interpersonal violence for college students continue to be alarming. We are making progress, but continue to have work to do to prevent and respond to incidents of violence.”

In recent years, the College has been an active participant in It’s On Us, a nationwide effort to shift responsibility for prevention of nonconsensual sex from the victims to the perpetrators and bystanders. That effort was strengthened this year by the College’s adoption of the Green Dot bystander intervention program, which encourages all campus community members to accumulate “green dots” - positive steps against sexual assault. The program’s motto is, “No one has to do everything, but everyone has to do something.”

“One way faculty and staff can help us raise awareness and promote culture changes is by printing out email attachments that advertise upcoming programs and initiatives and posting those in their offices or on their classroom Elmo screens to promote upcoming events,” Pasquarello said. “We also hope people will follow the SUNY Cortland It’s On Us Action Team on Facebook, Instagram and Twitter and share important messages in their social media circles.”

Yards for Yeardley: Help SUNY Cortland and other SUNYAC schools run or walk a million yards to raise awareness of relationship violence.