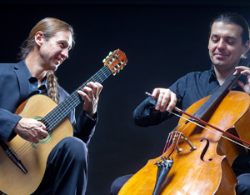 
The Richter Uzur Duo will perform a concert that features elements of classical music, rock and Eastern European folk, producing a sound that is all their own, on Saturday, Nov. 22, at SUNY Cortland.

The pair, which features Brad Richter on guitar and Viktor Uzur on cello, will share their native sense of vernacular, integrity and charm, starting at 7 p.m. in the Corey Union Exhibition Lounge.

Presented by the College’s Campus Artist and Lecture Series (CALS), admission to the show is free for SUNY Cortland students with College I.D. and children ages 10 and under. The general admission charge is $5. Tickets may be obtained through the Campus Activities and Corey Union Office, Corey Union Room 406, weekdays from 8:30 a.m. to 4 p.m., or at the door one hour prior to the performance. For more information, call 607-753-5574.

The duo offers a signature repertoire that pairs exquisite originals with blazing improvisations and iconic works by composers such as Bartok, Gershwin, Rimsky-Korsakov and Saint-Saens, as well as Freddie Mercury, The Beatles and Led Zeppelin.

Trained in two of the world’s most lauded musical institutions — Richter at the Royal College of Music and Uzur at the Moscow Conservatory — Richter and Uzur are consummate performers and accomplished composers, each having played around the globe to critical acclaim and international awards.

The duo has been featured regularly on “Performance Today,” America's most popular classical music radio program.

Their signature repertoire pairs exquisite originals with blazing improvisations and iconic works by composers such as Bartok, Gershwin, Rimsky-Korsakov and Saint-Saens, as well as Freddie Mercury, The Beatles and Led Zeppelin.