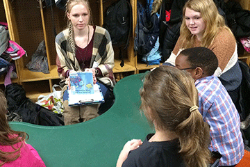 
Children are natural philosophers, although frustrated adults tend to squash their inclination to question the world by the time they start school, according to Mecke Nagel, a SUNY Cortland philosophy and Africana studies professor.

That’s why, seven years ago, Nagel created Sophia’s Garden, a program that cultivates and nurtures children’s fearless curiosity. The project — derived from the Greek “Sophia” (wisdom) — isn’t about teaching Nietzsche and Socrates to babes. It is about taking a simple approach to helping young children and teens discuss and grasp the big ideas in their lives as well as to deal calmly with conflict and highly emotional situations.

Operated within the university’s the Center for Ethics, Peace, and Social Justice (CEPS) by the Philosophy Department, Sophia’s Garden has been used successfully with toddlers at SUNY Cortland Childcare Center, at-risk girls in the Cortland YWCA’s GEMS project for at-risk girls (Girls: Empowered Motivated Successful), the pre-school children at Lime Hollow’s outdoor program and among elementary students at select schools in Cortland.

“What I got out of this program is that children are very smart, and they are smarter than they make themselves out to be, and they are very aware of their surroundings,” said Naamu Harvey ’19 of Syracuse, N.Y., a former philosophy major with an art minor who currently teaches at the preschool Childtime Learning Center of Syracuse while she prepares to enter a law school.

“They know how it corelates to them and their lives,” said Harvey, who as an undergraduate managed assignments of other Sophia’s Garden teaching assistants and volunteers.

She recalled how one boy at Barry Elementary School in Cortland opened right up to his classmates about moving in from outside the area and being the only Black child in his classes after having a book about children being different read to him.

“I didn’t think we would hear that out of a child’s mouth,” Harvey said. “I’m still working in that age group and they amaze me every day.”

Harvey is among an expanding cohort of teaching assistants, student volunteers and SUNY Cortland graduates in the workplace who are incorporating Sophia’s Garden into their classroom methodology.

“Many parents tell me they will shut down the children’s ‘why’ questions,” said Nagel, a faculty member in both the Philosophy and Africana Studies departments.

“You have brilliant philosophers up to, say, age 6, and by then kids learn to smother themselves.”

In Europe, children by high school age have left learning by rote behind, said Nagel, speaking from her own experience.

“The world is a wondrous place and we don’t have any answers,” said Nagel, expressing the philosophical shorthand used by herself, her teaching assistants and her class volunteers when they till the fertile minds of children and youth in Sophia’s Garden.

Nagel gives students in all her classes the option to switch one component, say public speaking, with signing up for Sophia’s Garden.

“Education majors can do a very unstructured class observation,” Nagel said, explaining why many volunteers for this hands-on learning opportunity also are enrolled in the School of Education. “It’s a free-for-all. Many of them do a picture book with the children.”

A multidisciplinary effort involving a large town-gown board, Sophia’s Garden was co-founded by Nagel and Chea Snyder, a former Communications Disorders and Sciences Department faculty member and speech therapist at Randall Elementary School when she reached out to Nagel.

“Now I call it an institute of these committed board members from across the university and the community,” Nagel said. “It becomes a clearing house for all things. Philosophy meets physical education, speech pathology and communication disorders. I can now approach (Physical Education Professor) Tim Davis and say, can we work with your children,” with sensory disabilities coming through Davis’ Sensory Integration Motor Sensory (SIMS) Lab located in Park Center.

Other faculty who frequently teach with children’s books have visited to offer tips to the college students. Word is getting out about the program on a wider scale as well.

Some of Nagel’s proteges have since become teaching assistants.

Katelyn McDonald, an inclusive childhood education major from Whitney Point, N.Y., enrolled in Nagel’s Black Feminism Philosophy class in Spring 2020 and volunteered to work with children in the 2- and 3-year old room in the SUNY Cortland Child Care Center. The onset of the COVID-19 pandemic which ended in-person interactions halfway through didn’t stop her.

“I knew they had it in them,” said McDonald, who will complete her student teaching and graduate in December. “All it really would take was kind of throwing the idea out there and giving them the opportunity to take it where they wanted.”

McDonald and five other teaching assistants met weekly with Nagel to plan how to prepare the daycare educators for the next week’s class. Where other students gave PowerPoint presentations, McDonald experimented with an online source called Nearpod, which let her share videos and songs with the tots, along with the usual pictures and story read-aloud.

“I think it was groundbreaking for everybody: the kids, the Cortland students who participated as well as Professor Mecke, especially with my having worked with daycare kids before,” McDonald said.

“It was amazing how you could take such a simple concept as ‘Why do penguins waddle, deer walk on four legs, and humans two?’ The kids would say, ‘I wouldn’t be able to play baseball, I wouldn’t be able to run a race!’ They connected to things they’ve seen and kind of made it their own. It was amazing how they interact with the world and it’s so much easier for the really younger kids to think outside the box.”

“It makes you think critically about the choices you make in life,” Harvey said. “You need to think before you choose to do something. Your choice affects others and others’ choices affect yours.”