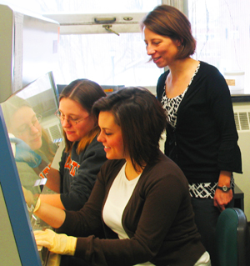 
Imagine a physician taking an immediate and accurate medical reading on a stroke patient with a small, hand-held device rather than ordering days of intrusive, intensive and expensive diagnostic tests.

The idea conjures up images of Mr. Spock and Dr. “Bones” McCoy from the vintage 1960s “Star Trek” science fiction television series, but the reality might be fairly close at hand.

Theresa M. Curtis, a SUNY Cortland associate professor of biological sciences, has joined a team of researchers from three collaborating SUNY institutions and Cornell University to advance a prototype of a pocket-sized sensor that can read critical information from a single drop of patients’ blood.

In theory, the resulting data from this piece of equipment could then be uploaded into a commercial device such as a smartphone, to be shared with all caregivers for any given patient.

The team of specialists in biomedical science, nanotechnology, engineering and clinical medicine are calling the project “Development of Hand-held Biosensors for Rapid Diagnosis and Study of Neural Disease and Neurotoxins.”

“To make this into a real medical device that a doctor can use, they need to be able to receive the data into a device that’s portable, easy to use and inexpensive,” Curtis said.

She previously developed an inexpensive and portable biosensor for the U.S. Army using live cells grown on electronic sensors as biological red flags for drinking water impurities. Curtis will use her biosensor expertise in the new collaboration to develop a sensor that can specifically detect when neurons are damaged.

Neurons in the brain become damaged and die during stroke, traumatic brain injury, and Alzheimer’s disease. In recent years, scientists have discovered that damaged neurons release biomarkers of the injury into the blood.

“If we can develop a simple, inexpensive, and sensitive method to detect these biomarkers then we could change the way these pathologies are detected and treated,” Curtis said.

Led by principal investigator Alexander Travis, an associate professor of reproductive biology in Cornell University’s Baker Institute for Animal Health, the team has captured $150,000 in seed money from the SUNY Network of Excellence in Health program, which is part of the Research Foundation for SUNY, to advance a unique, one-year collaboration. The goal of this program is to establish strong, inter-campus, multi-disciplinary teams that build SUNY’s expertise in health.

“It is really hard to develop a multi-institution collaboration without any seed money and that is why this is so important that we have been chosen for this grant,” Curtis said.

Travis brings to the project the cutting-edge tethered enzyme technology (TET) he developed previously through a National Institutes of Health (NIH) Pioneer Award. His invention, in a nutshell, uses enzymes immobilized to a solid surface in a device to sensitively detect the biomarkers of injury.

In June, the team met face-to-face in Albany.

In addition to developing a biosensor to detect human pathologies such as stroke, traumatic brain injury, and Alzheimer’s disease, the group will also use the platform to detect potential neural toxins in the environment. Healthy live neurons can be grown in a sensor, exposed to environmental samples such as drinking water, and biomarkers of neural injury can be detected if released.

“Having a portable, sensitive, and inexpensive technology to quickly assess neuron health will allow scientists to study the mechanisms of neural injury, and potential treatments to prevent or reverse neural injury,” Curtis said.

If the research yields promising results, the SUNY Health Network of Excellence colleagues will set their sights on a much larger grant.

“Working as a SUNY team would allow us to compete for larger NIH grants or Department of Defense grants that we normally would not be able to achieve,” Curtis said. “Research funding is so competitive now,” she said. “Having this collaboration would really set us apart and make us more competitive compared to the work from one lab.”