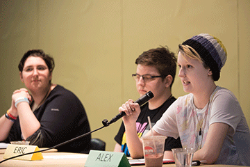 
Court Pineiro ’18 was an example to all transgender students while at SUNY Cortland.

While here, the former outdoor recreation major from Milton, N.Y., was honored twice with the College’s Leadership in LGBTQAIP Advocacy award for speaking publicly and freely about his personal transition to male.

Pineiro will return to his alma mater to give the closing keynote presentation on “Transcend” Friday, March 1, during the College’s “TransAction” conference about the needs and experiences of transgender and genderqueer students in the college environment.

“I thought I would speak about how I transcended and how I broke through the limits of what society thought that I was capable of doing,” Pineiro said.

The one-day conference in the Corey Union Exhibition Lounge runs from 9 a.m. to 4 p.m. and also will feature a second keynote speaker, two panel discussions and an exhibition of community service agencies and advocacy groups.

Participants are encouraged to register online. The conference is free for SUNY Cortland faculty, staff, or students. A non-refundable $15 registration fee will be charged for non-SUNY Cortland attendees. Scholarships are available upon request. For more information, contact Erin Morris.

“Unlike other diversity conferences at Cortland, or even other workshops on the LGBTQAIP community, this is focused exclusively on people who are transgender or fall outside the binary,” said Jena Nicols Curtis, a SUNY Cortland professor of health who coordinates Women’s, Gender and Sexuality Studies at the College and serves on the Sexual Orientation and Gender Identity Expression Committee (SOGIE) which organized the conference.

“Often trans and non-gender conforming people get lumped at the end of the LGBTQAIP community even though they have very different needs and experiences,” Curtis said.

Cecilia Gentili, the assistant director of public affairs at GMHC, the world’s first and leading provider of HIV/AIDS prevention, care and advocacy, will deliver the keynote speech on “Trans, Gender Non-Conforming and Non-binary realities.” A native of Argentina, she is passionate about advocating for her community, especially transgender women with a Latino background and a history of sex work, drug use and incarceration.

Also during the conference:

Pineiro has maintained his high profile since graduation.

Last fall, he put all his bodybuilding work at SUNY Cortland to good use when he walked the catwalk in clothing designed by Marco Marco during New York Fashion Week. The designer had made history at that show for presenting an entirely transgender roster of models for its underwear brand.

“I thought this would be a great time, especially in society today and just at this point in my life, to speak about basically pushing through the limits of what society says you can do, not just as a trans person but in general,” Pineiro said.

“I remember that when I was younger, I was always told certain things but there was never shown anyone in the media who was successful who was in my position,” Pineiro said. “It just wasn’t talked about.”

An inclusive physical education major for three years, Pineiro also transformed himself as he transitioned to outdoor recreation with a concentration in leadership.

“I loved certain things about physical education…. but thought that having curriculums and all these things was kind of boxing me in and wasn’t allowing me to use my personality and my creativity as much as I would like to,” Pineiro said.

The academic move, along with a leave of absence as he made a surgical transition, stretched out his time at Cortland but rewarded him with the Recreation, Parks and Leisure Studies Department’s Outstanding Senior Award.

In his new major, he retained a love for including people with disabilities in recreational opportunities.

Now he is 25, and wants to move to Massachusetts with his girlfriend where he hopes to expand on his post-collegiate experience working as a direct support professional with Duchess County Arc, a chapter of the largest national community-based organization advocating for and serving people with intellectual and developmental disabilities and their families.

Never in her 13 years teaching at SUNY Cortland has Curtis met so many students on campus who identify as transgender.

SUNY Cortland has always had trans students, according to Curtis.

“We just may not have known it. They might not have felt safe telling us.”

One student panelist came out into his identity at 16.

“He came to Cortland knowing that he was a trans man and he decided SUNY Cortland was the place to come,” Curtis said.

One of the agencies and organizations that serve non-binary gender clients is the Trans Voice Clinic, a service of SUNY Cortland’s Center for Speech, Language and Hearing Disorders.

“The clinic teaches transgender people how they can modulate their voices and speak in ways that better match their gender identity,” Curtis said.

“Cortland is building a lot of capacity to be inclusive of our transgender students, faculty and staff,” Curtis said.