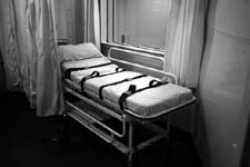 
New York photojournalist Scott Langley’s black and white images chronicle the grim sequence of events transpiring in and around the death chamber before and after an execution.

The curtain of secrecy will be pulled back for the campus and community to view just a few of Langley’s chilling images during an exhibition and opening reception at 4:30 p.m. on Wednesday, Feb. 27, on the second floor in SUNY Cortland’s Memorial Library.

The show, titled “Visions of Impending Death: Bearing Witness to Executions in the United States,” is free and open to the public.

Langley will be available to discuss his work with visitors. Five of his pieces will be on display during the presentation only and two additional images from among the collection are being shown from now until Friday, March 15, in a glass case near The Bookmark café. All are owned by the Ithaca chapter of Amnesty International.

“The images depict an insider's hour-by-hour walk-through of what happens on an execution night, taking the viewer from the prison deathwatch cell into the actual lethal injection chamber,” Langley said. “Photos from Troy Davis's recent execution in Georgia tell the story of what happens outside a prison in the moments leading up to execution.”

The presentation also includes original photos from execution vigils, both for and against the death penalty, marches and rallies. It features portraits of exonerated death row prisoners, candid emotional and prayerful moments, and celebrities who are outspoken on the issue.

The photographs, together with Langley's narratives, uniquely combine art, journalism and education into a poignant and powerful experience.

Executions in the United States are not public events, so the events culminating a death sentence happen off camera, behind closed doors and in the dark of night. Langley’s camera captures scenes that very few people see or experience.

“The death penalty photography documentary project began in 1999 as a college class assignment in Texas, artistically capturing what was available to those of us ‘on the outside,’” Langley said.

Since then, the project has expanded to include thousands of images, including in-depth coverage of North Carolina, Georgia, and the federal death penalty.

Langley’s project is considered to be the most comprehensive collection of original United States death penalty-related photographs available from one source.

His images capture unforgettable moments such as when the Ku Klux Klan rallied in support of a black man’s execution in Texas; as well as the vivid scene of a North Carolina death row warden wheeling a gurney into the execution chamber and weeping family members at the moment of a loved one’s execution.

His documentary work has been widespread throughout the world in recent years — appearing in newspapers, magazines, books, encyclopedias, theater productions, calendars, films, on television and t-shirts.

A photographer who has been engaged with death penalty issues for decades, Langley has received numerous awards for his work and frequently exhibits for Amnesty International. In 2009, he was honored with the People of Faith Against the Death Penalty's Community Service Award, presented to The Justice Theater Project, featuring the death penalty photo project.

He has been an active grassroots organizer against the death penalty since 1999. Since 2004, Langley has served as an Amnesty International USA state death penalty coordinator, first for North Carolina and Massachusetts, and now New York state.

More of his personal and documentary work can be seen at scottlangleyphoto.com.

The exhibition at SUNY Cortland also is supported by the Campus Artist and Lecture Series, Center for Gender and Intercultural Studies, the History Department, and the campus Amnesty International student group.