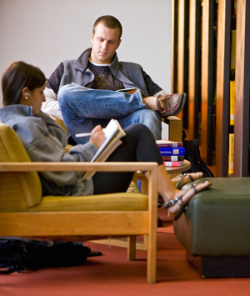 
When it comes to grade point average, SUNY Cortland’s Greek organizations are dispelling any false stereotypes that may hover over fraternities and sororities.

That’s because the collective GPA for Cortland’s social Greek organizations, at 3.11, exceeded the College’s average undergraduate GPA, at 2.99, during the Fall 2011 semester. Fraternities and sororities both earned average GPAs higher than their gender counterparts at Cortland.

“That’s what I like to call the social Greek trifecta,” said Sandra Wohlleber, the College’s assistant director for campus activities and Greek affairs, referring to the fact that fraternity, sorority and total social Greek GPAs all exceeded the undergraduate average.

“One of the criticisms that’s often laid out against any fraternity or sorority is that they’re social groups, so they don’t pay as much attention to their academics,” Wohlleber said. “Parents are always asking: ‘If my son or daughter joins this group, is it true that their grades are going to go down?’”

“Not to sound silly, but I’m here to go to school,” Budofsky said. “Do we like to have fun? Of course. But school’s always the first priority.”

“There’s bound to be someone in the house to help you with your work if you need it, whether it’s a quick question or whether it involves editing a paper,” said Budofsky, who lives with four students pursuing the same major.

Greek GPAs at SUNY Cortland have climbed steadily since Wohlleber started working at the College in 2005, she said. Every semester, she uses a spreadsheet to track each Greek organization’s average GPA. She then sends big-picture numbers, such as the number of GPAs that improved or declined, to fraternities and sororities.

Potential scholarships from national chapters motivate students, Wohlleber said. The same can be said for improved academic programming, which may include library study hours or peer tutoring.

“We like to suggest that our pledges go to study hours in the library,” McKenna said. “It’s not mandatory, because it could be interpreted as a form of hazing, but it demonstrates that we take pride in what we do.”

“It’s so easy for any student organization, especially the Greeks, to get colored with a negative overtone,” Wohlleber said. “That’s why I’m so proud of them. Their performance academically, it’s thrilling.”