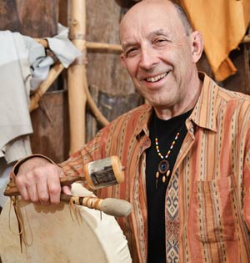 
Joseph Bruchac, an Abenaki storyteller and author from the Adirondack mountain foothills, will read from his books and discuss his views on the Native American oral traditional on Monday, April 14, at SUNY Cortland.

Bruchac will begin his talk at 4:30 p.m. in Brockway Hall Jacobus Lounge.

Presented by the Cultural and Intellectual Climate Committee, the event is free and open to the public.

Bruchac is the author of more than 70 books for adults and children, and his writing has appeared in more than 500 publications, including National Geographic and Smithsonian Magazine.

Much of his writing draws on the land where he lives and his Abenaki ancestry. Bruchac’s American Indian heritage is only one part of an ethnic background that includes Slovak and English blood, but he has nourished native roots.

He has been a storyteller-in-residence for Native American organizations and schools throughout the continent, including the Institute of Alaska Native Arts and the Onondaga Nation School. Bruchac discusses Native culture, his books and offers storytelling programs at dozens of elementary and secondary schools each year as a visiting author.

His work as an educator includes eight years directing a college program for Skidmore College inside a maximum-security prison.

Bruchac’s honors include a Rockefeller Humanities Fellowship for Poetry, the Cherokee Nation Prose Award, the Knickerbocker Award, the Hope S. Dean Award for Notable Achievement in Children’s Literature and both the 1998 Writer of the Year Award and the 1998 Storyteller of the Year Award from the Wordcraft Circle of Native Writers and Storytellers. In 1999, he received the Lifetime Achievement Award from the Native Writers Circle of the Americas. One of his books, Breaking the Silence, is the winner of an American Book Award.

Bruchac holds a bachelor’s degree from Cornell University, a master’s degree in literature and creative writing from Syracuse University and a doctorate in comparative literature from the Union Institute of Ohio.

He lives in the town of Greenfield Center, N.Y., in the same house where his maternal grandparents raised him.