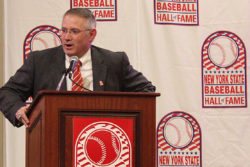 Brown's accomplishments in his 17 years as Cortland's head coach include:

Brown is a 1990 graduate of Ithaca College and was a player on the Bombers' 1988 national championship team.