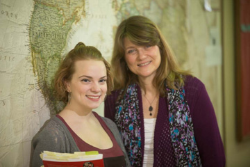 
When Claire Leggett thinks back to the Historical Methods course she took in her first year at SUNY Cortland, she remembers scanning the syllabus and fretting the 15-page research paper it outlined.

She never had tackled a college assignment of that length, so naturally she worried about what it would entail. The grade she eventually earned was fulfilling. Even more rewarding were the possibilities that her scholarly work has produced.

The East Aurora, N.Y., native will be one of four SUNY Cortland students headed to the National Conference on Undergraduate Research (NCUR) at the University of North Carolina Ashville in April. Their projects were among those chosen out of more than 4,000 proposals, representing academic disciplines such as archaeology, biochemistry and English.

Each will travel to the national conference thanks to support from the College President’s Office and SUNY Cortland’s Undergraduate Research Council.

The other student participants include:

In Leggett’s case, she’s spent more than a year tracing the mixed success of racial integration of public schools in Buffalo, about 20 minutes north of where she grew up. What began as a capstone assignment for a writing-intensive course on U.S. civil rights struggles has turned into independent research she eventually hopes to have published.

“Claire’s attitude shows that many students enjoy challenge and rising to it,” said Gigi Peterson, the SUNY Cortland history professor who inspired Leggett in the Historical Methods course. “It’s important to have that attitude.”

The meaningful work started in a class in which students develop crucial, inquiry-based skills — formulating a compelling argument, locating key sources and crafting a final paper that ties the research process together. Peterson’s version encouraged students to think beyond the traditional portrayal of the African American Civil Rights Movement of the 1950s and 1960s to topics such as the combat roles of women in the military or the media’s portrayal of black soldiers’ contributions during World War II.

“Your first thought when you hear school integration is Little Rock ... these images of the National Guard and the Little Rock Nine,” said Leggett, referring to the famous example of racial hostility from Arkansas in 1957.

Leggett realized quickly that her search for the project’s sources needed to go beyond the Internet. It meant visiting the Buffalo Public Library during her spring break and sifting through newspaper articles from the time period, which revealed far more than the general overviews she came across online.

She learned that Buffalo’s schools once were a model for integration in the 1970s with the creation of magnet schools and new busing routes. She also discovered integration in Buffalo was a relatively smooth, four-phase process without the opposition that existed in the South.

“I uncovered so much,” she said, noting that more than 15 of Buffalo’s 70 public schools were more than 99 percent black prior to integration. “As I started digging, it got bigger and bigger. Instead of just reading ‘Schools were desegregated in 1976,’ I saw there were so many factors that came into play.”

She observed that residential patterns were the root of school segregation issues and that court-mandated federal funds proved vital to the city’s successes from 1976 to 1987, especially with the creation of well-designed bus routes. However, Leggett also learned that integration efforts in Buffalo’s schools ultimately failed once the funding ran out.

“For one of the poorest cities in the U.S. to have a model of integration — even for just 11 years — proves that it can work,” Leggett said. “I learned that federally mandated funds to support integration are a good idea … that we can learn a lot from Buffalo’s example.”

Last June, after the history course had ended, she emailed Peterson to indicate she wanted to continue with her research, with the intention of moving it beyond an undergraduate paper.

“When I teach this course, I like to say to students, ‘This is your chance to pick a topic you enjoy,’” Peterson said. “The credit for this goes to Claire. She saw that she staked out something that was more than a 15-page paper for the semester, and she decided to run with it.”

Peterson also noted that the small class size for the Historical Methods course allows for a special bond between students and faculty members — the type of quality interaction, individual feedback and attention that writing intensive research courses require.

“Claire’s one of those students with a lot of interests and talents,” said Peterson, who has taught at the College since 2002 and will join Leggett on the trip to the national conference in April. “It’s rewarding as a professor when you can be part of someone’s experimentation and growth in that way.”

Leggett, whose mother used worked at a children’s museum in Buffalo, counts history as one of her many interests on campus. She discussed her research as a member of a student panel during the College’s Black History Month celebration in February. She’s also a costume designer with the Performing Arts Department, a staff member at the Student Life Center’s rock climbing wall and an academic peer tutor with the College’s Academic Support and Achievement Program (ASAP).

Leggett said sometimes recalls the nerves she felt when the major research project initially was assigned. Those feelings quickly are replaced by a sense of satisfaction when she thinks about where the process led her.

“As it’s gone by, as my research has evolved, I’ve realized that I don’t want it to stop,” she said. “I love doing it. I love sharing what I’ve learned with people.”