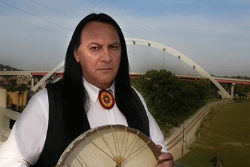 Miller, from northern Wisconsin, will present “An Evening with Bill Miller” at 7 p.m. in Old Main Brown Auditorium.

Tickets prices are $3 for all students, free for children 10 and younger but a ticket is still required, $8 for senior citizens ages 60 and older, and $10 for general admission.

Tickets are available electronically through the College Store of SUNY Cortland (select ‘shop’ on the top menu and then ‘event tickets’); or in person between 8:30 a.m. until noon and from 1 until 4 p.m. Monday through Friday in the Campus Activities Office of Corey Union, Room 406; by calling 607-753-5574; or at the door one hour before show time.

Miller, who has won six Native American Music Awards including a 2007 Lifetime Achievement honor, has long been one of the most admired figures in Native American arts and activist arenas. He has served as a voice for the voiceless and a link between two great and clashing civilizations populating the continent.

He grew up amid the streams and woodlands of the reservation with the tribe that is properly called Mahicanuk, which means “People From Where The Waters Are Never Still”.

An acclaimed speaker, activist and gifted painter, Miller uses his heritage, life experience and spiritual path to share his message of transformation through reconciliation.

Miller currently is touring in support of the history-making album release, “Look Again To The Wind,” on which he performed the title track.

He pursues an equally active career as a visual fine artist. He is exclusively represented worldwide by American Indian art authority and private fine art dealer Ken Lingad (Indian Pueblo of Isleta). Constantly creating fresh works of visual art, Miller’s painted masterpieces and drawings have been shown and sold in prestigious galleries around the country, while several of his iconic paintings have been acquired by the Smithsonian Museum and other important collections.