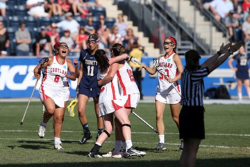 The Red Dragons, playing in their first-ever NCAA title game, had lost to the Bantams in national semifinal games in each of the past three seasons. Led by first-year head coach Kelly Lickert-Orr, SUNY Cortland finished the 2015 campaign 22-1 and tied the school record for wins in a season.

The College ran out to an 8-2 halftime lead in the championship and never trailed in the game.

Sophomore goalie Jaclyn Beshlian stopped eight shots in between the pipes. She was joined on the Final Four All-Tournament Team by Elmer, Hayes-Hurley, Monaghan and Ohberg.

The win marked SUNY Cortland’s 19th in a row and punctuated an impressive NCAA Tournament run that saw the team win four of five games by at least seven goals. After falling behind 4-0 to Middlebury College in the national semifinals, the Red Dragons came storming back for a 19-12 win.

The national championship is the College’s first team title since the men’s lacrosse squad won an NCAA crown in 2009. The SUNY Cortland Athletics Department now boasts 24 national team titles in its history, including 18 NCAA championships.