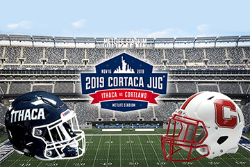 
One week after tickets went on sale for Cortaca Jug 2019 in MetLife Stadium, SUNY Cortland and Ithaca College are already more than halfway toward setting a new national attendance record for a Division III football game.

The New York City Chapter of the National Football Foundation and College Football Hall of Fame (NYC/NFF) reported that In the first full week of ticket sales from Nov. 27-Dec. 3 almost 20,000 tickets were purchased through Ticketmaster.

This number does not include the 5,000 tickets that are being held back for each school to sell on campus to students, faculty and staff next fall. Those tickets are for $15 seats located in the end zone sections designated for each school.

This puts the current anticipated ticket sale figure at nearly 30,000, which would make it easily the second-highest attended Division III football game in NCAA history and a serious threat to break the all-time Division III attendance record of 37,355.

Fans can still purchase tickets to the history-making Nov. 16, 2019 game at MetLife Stadium in New York City. They are available online now through CortacaJug.com. Tickets are priced at $35, $25 and $15.

"We are thrilled to see such a strong start to ticket sales for the 2019 Cortaca Jug game," said Marc Hudak, Chairman of the NYC Chapter of the National Football Foundation, the organization sponsoring the re-located game as part of the 150th Anniversary Celebration of College Football.

"It speaks to the intensity of this rivalry and the great football tradition at each school. Our organization as well as Ithaca College and SUNY Cortland are committed to making next year's Cortaca Jug an event that should not be missed. When all of the planning is complete, and the details are released, I am confident that there will be something for everyone to enjoy at next year's game."

Hudak is an alumnus of Ithaca College, which — as home team for the 2019 contest — would normally host the game in Ithaca at Butterfield Stadium. That stadium hosted the largest crowd to ever witness a Cortaca Jug game, 12,620 fans, in 2001.

The Top 5 most-attended games in the history of Division III football were:

Founded in 1947, the National Football Foundation is a nonprofit educational organization that runs programs designed to use the power of amateur football in developing scholarship, citizenship and athletic achievement in young people. College Football 150th Anniversary is a nonprofit corporation formed to plan and administer a national celebration of 150 seasons of collegiate football in 2019.

The commemoration will showcase the rich history and traditions of the sport and its contribution to American society and culture. It will also promote the opportunity football continues to provide to thousands of student-athletes across all levels. The NYC Chapter of the National Football Foundation exists to support the mission of the National Football Foundation and College Football Hall of Fame in the five boroughs of New York City.