Cortland Concert Legacy to be Explored by Panels 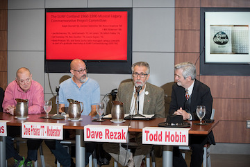 
Since the 1960s, students at SUNY Cortland have been involved in planning and booking some of the hottest names in the music industry to perform on campus.

In the 1960s it was Duke Ellington, Count Basie, Judy Collins and Simon and Garfunkel. Big names in the 1970s included The Grateful Dead, Billy Joel, The Beach Boys, Jackson Browne and The Eagles. And the 1980s brought artists like James Taylor, The Ramones, Cheap Trick, Southside Johnny and The Kinks to campus.

The list reads like a who’s who of popular music history over the last 50 years, reflecting cultural change, the rise of student engagement and activism.

At SUNY Cortland, this involvement gave many students a strong foundation for careers in music, media, marketing, education, public relations, event management and other fields.

Students, faculty, staff, alumni and community members can learn about how these concerts and their music intersected with great shifts in American culture and inspired a generation of college students to get involved while unintentionally setting themselves up for long and successful careers.

A panel discussion by former students involved with the classic concerts and experts in the music business will be held on campus at two separate times and locations on Thursday, Nov. 1.

The first, which will explore the history of SUNY Cortland’s impressive list of great concerts, will be presented as a sandwich seminar at noon in Brockway Hall Jacobus Lounge.

The second, which will additionally focus on how student involvement in booking and managing big shows was — and continues to be — a great career builder, starts at 7 p.m. in Corey Union Fireplace Lounge.

Speakers at both events inlude:

They are part of a series of events planned by the SUNY Cortland Alumni Association’s Musical Legacy Committee. The first was held on Oct. 6, during the weekend of SUNY Cortland’s 150th Birthday Celebration.

For more information on the SUNY Cortland Sesquicentennial, visit Cortland.edu/150.