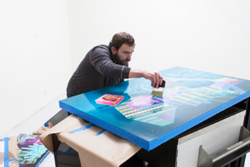 
Jaime Brett Treadwell ’99 didn’t score many goals as a captain of the Red Dragon hockey team 17 years ago, but created a lasting SUNY Cortland hockey legacy.

“There’s still a sculpture of a hockey player that I made in the Park Center on the second floor outside the rink,” said Treadwell, now a professional artist with an exhibit at SUNY Cortland’s Dowd Gallery. “It’s probably my most literal translation of hockey to art.”

Treadwell’s recent collection of brightly colored abstract paintings, titled “Fade to Gray,” opened Aug. 29 and will run through Friday, Oct. 7. His return to campus will include an artist’s talk, a printmaking demonstration and the creation of a hallway mural in Dowd that he will produce with SUNY Cortland students.

“Jaime was a decorated hockey player while he was at SUNY Cortland,” said Dowd Gallery Director Erika Fowler-Decatur, talking about the artist’s deep connection to the College. “He was one of our relatively rare artist-athlete students.”

The artist admits he chose Cortland primarily for its varsity ice hockey team.

“I wasn’t much of a goal scorer,” Treadwell acknowledged. “I was a stay-at-home defense man, someone who doesn’t let the other team score.

“I look back and wonder how I was able to balance two completely opposite worlds.”

He captained the team his senior year and also bolstered his teammates’ overall academic profile by reliably earning a strong grade point average in art and in his other interests, communication studies and the humanities. Treadwell graduated with honors in 1999 with a BFA in painting and sculpture while capturing coveted art scholarships. These included a Gerald N. DiGiusto Scholarship and SUNY Cortland’s Excellence in Studio Art Scholarship.

Treadwell had wielded a hockey stick from age 12, but said he embraced art much earlier. When other children had lemonade stands on their parents’ front lawns, he sold pastels at his ‘art stand’.

“He took me under his wing, urged me to go on to graduate school,” Treadwell said of the late SUNY Cortland professor emeritus of art and art history. “After college, with his encouragement, I and three of my classmates rented a warehouse off Tompkins Street, installed a shower and left the bubble of SUNY Cortland to go out into the community as artists. Three of us went on to graduate school.” Treadwell earned an M.F.A. in painting from the University of Pennsylvania.

Both Treadwell and his mentor, Dugan, shared a long collaboration, although over the years their artistic styles diverged as Treadwell explored new and more contemporary themes. They once co-taught Dugan’s annual painting course in Dingle, Ireland. Dugan passed away earlier this year.

Treadwell, who lives and works in Philadelphia, teaches as an associate professor of art at Delaware County Community College, where he was presented with the institution’s 2015 Gould Award for Teaching Excellence. He has earned numerous grants, fellowships and art awards. His work has been displayed in six solo exhibitions and in 36 select group exhibitions at American galleries and at one in South Korea.

His more recent artwork features invented geometrical forms in vivid, synthetic colors that seem to shimmer and shift under their highly varnished surfaces. His style combines the retro-aesthetics of science-fiction, futurism and digital graphics, which evoke a kind of 1980s nostalgia.

The “Fade to Gray” exhibition will be open to the public from 10 a.m. to 4 p.m. Monday through Friday and by appointment. The events and programs are free.

One of Treadwell’s former instructors is Kathryn Kramer, department chair and professor of art history at SUNY Cortland.

“These new works exist squarely within the current revival of Op (Optical) Art, a style emerging in the 1960s and comprising abstract, geometric patterns and shapes that often feature optical illusions,” Kramer noted.

Treadwell describes this recent body of work as “venturing into a new direction for me, focusing solely on the basic elements of color, line, shape and light. It also attempts to challenge perceptual certainty through the contrast of blurred and focused imagery.”

A common thread through his creative phases has been his unabashed neon-bright palette.

“Color is the main thing of all my work,” Treadwell said. “The hues and values all have to be right. I’ll stare at the painting forever. It’s like you’re at the restaurant and can’t decide on two different choices. But the color is very deliberate.”

His work has undergone several phases and some of his less recent, but perhaps more familiar, paintings mash up classical figures with American pop culture: Grecian statuary mingling with bikini-clad manikins against a campy, yet riveting, neon background.

“If I can make something corny also be beautiful I’m totally satisfied,” Treadwell said.

He has a website that includes information and examples of his work, snapshots of him at work in his studio, and a selection of magazines that featured his cover art and contain interviews with him inside. A recent interview by Tim Maclean in Wow magazine attempts to explain his work.

The Dowd Gallery is located in SUNY Cortland’s Dowd Fine Arts Center at the corner of Graham Avenue and Prospect Terrace.