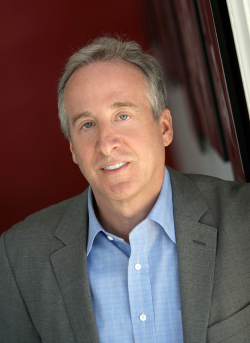 
Long before he launched a San Diego-based media consulting firm and before he helped establish one of the first all-news FM radio stations in the country, Michael Flaster ’78 was the founding student manager of SUNY Cortland’s WSUC-FM.

He’s currently enjoying a weeklong executive in residence stay that includes classroom discussions with current students as well as a public talk Thursday, Sept. 11. The 3 p.m. lecture is free to attend and will take place in Brockway Hall Jacobus Lounge.

Flaster’s distinguished career in new media, broadcasting and film spans 30 years and includes more than two decades in public radio and television, most recently as associate general manager with KPBS-FM in San Diego. Today, he serves as president of Traveling Mind Productions, a media consulting firm based in La Jolla, Calif. He has advised groups that include National Public Radio the National Endowment for the Humanities, the California Arts Council, Minnesota Public Radio and both public and commercial broadcasting systems in Eastern Europe’s Republic of Moldova.

A former philosophy major and biology minor at the College, Flaster helped establish SUNY Cortland’s FM radio start-up in 1976, bringing classics from the likes of Lennon, Dylan and the Dead to campus and the greater Cortland community. His winding path across the television, radio and film fields embodies the concept of media entrepreneurship he often stresses in talks with students.

“They need to be able to create new categories of jobs.”

His own media career started shortly after he graduated from the College, when he served as the assistant director of Corey Union and the director of student media services.

“It was the greatest job in the world,” he said, rattling off responsibilities that included recording campus performances, organizing film festivals and concerts, and overseeing the FM radio station he helped lift off the ground.

During his weeklong stay through Friday, Sept. 12, Flaster will meet with current members of the student radio station as well as Communication Studies Department faculty members and undergraduates in courses that include Introduction to New Media, Digital Culture, and Media Criticism.

“The station provided me with a wonderful workshop, a way of learning about myself and giving back to the community, a way of expressing myself and learning about communications,” he said. “I’m hopeful that coming back might be able to reinvigorate the (radio) operation so that it becomes more of a local resource that speaks specifically to the community with content developed by students.”

Flaster went on to hold several radio positions in northeast Ohio after leaving Cortland, working his way up to director of programming and operations for National Public Radio affiliate WKSU-FM, an arts and cultural station that invented several new formats for its time. He earned a master’s degree from Kent State University in 1988.

In 1989, Flaster moved to San Diego, where he’s spent the past 25 years. At KPBS-FM, he served as architect of the station’s news and information format and the executive producer for many of the station’s premier local programs during a 12-year career.

“I came out to San Diego to do a station turnaround,” said Flaster, who also pioneered a media convergence model at the station during the 1990s, one that produced content across all media — for television, radio and the Web.

Throughout his career, Flaster has weaved teaching opportunities with his professional obligations. He served as a visiting scholar at Columbia University’s Graduate School of Journalism in 1997 and previously taught in the communications departments at Kent State University and San Diego State University. He also has lectured at the University of California, San Diego and New York University.

“And then hopefully, that learning translated into something for a larger audience.”

Named Public Television’s Programmer of the Year in 1995, Flaster’s documentaries have appeared as part of the PBS national schedule. His radio work has received first-place honors for journalistic excellence in radio economic and feature reporting from the Southern California Radio/Television News Director’s Association and from the San Diego Press Club. And his work as a television executive producer also has been recognized three times with first-place honors by the Southern California Radio/Television News Director’s Association.

He was recognized as one of the “Top 50 San Diegans to Watch” in 1996 by San Diego magazine and was honored with a first-place award by Northern Ohio Live magazine for his work as a producer of National Public Radio’s live, two-day Statue of Liberty centennial broadcasts from New York City in 1986.

Still, Flaster said his proudest accomplishment is the community building that occurred at the four stations he managed. One of those stations is WSUC-FM at SUNY Cortland.

“I think radio and the media have the opportunity, when they’re really done well, to bind communities, to bring talent and ideas together in some very creative and dignified ways,” he said. “I’ve had the opportunity to do that at four stations, and I think the communities have been better off for it.”

Flaster said he opts for volunteer work that’s meaningful to him, just like his consultation projects and speaking engagements. That includes his visit to the College this week.

“I’ll hopefully end up learning as much as the students,” he said.