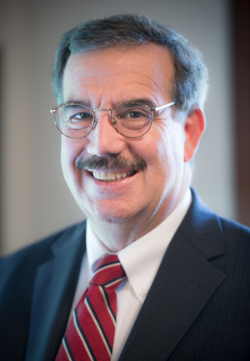 Those were just a few of the highlights outlined last Thursday in the President’s Fall Opening of School Meeting in the Corey Union Function Room.

The president spoke for nearly an hour in front of a large crowd of faculty and staff members, offering updates on important campus news, praising the College’s recent progress and calling for a unified effort against trends in student behavior that are challenging colleges across the nation.

“It’s a very exciting time in the life of the College,” Bitterbaum said.

SUNY Cortland is welcoming 27 new faculty members for the 2014-15 academic year — 19 who are on a tenure track and eight hired as full-time lecturers — as well as 17 new professional staff members. Since 2011, the College has hired 74 new faculty members, more than it hired during the entire decade before that.

“I think that’s the lifeblood of this college,” he said. “Not just all of the construction or the new facilities we have, it’s really the people in those building who make a difference.”

In spotlighting the success of SUNY Cortland’s International Programs Office, President Bitterbaum noted that 16 percent of the College’s undergraduate students are opting to study abroad, which is higher than the 14 percent national average.

“We’re doing some really amazing things,” he said, mentioning a new program under development for India and an approved dual-campus graduate program in Turkey devoted to teaching English as a second language. “There’s no discipline where you can’t go abroad.”

The community-focused work of the College’s Institute for Civic Engagement (ICE) also received special recognition. So did Richard Kendrick, the director of ICE and a professor of sociology/anthropology who is retiring at the end of the academic year. Last year, the College’s students offered $1.3 million worth of volunteer hours based on a statewide estimation measure. This semester, more than 50 courses will include a service-learning component.

The president offered the example of the Cortland Rural Cemetery and the opportunities it provides several academic disciplines to learn outside of a traditional academic building: geology students to develop an interpretive trail, geography majors to create a printed map and a biological sciences course to identify and label the cemetery’s trees.

“It’s just an example of how the Institute has reached out to the community and the variety of things we do,” President Bitterbaum said.

Among the other highlights he shared:

• The Cortland College Foundation raised $2.9 million during the 2013-14 fiscal year, bringing the College’s endowment to more than $35 million.

• Opportunities continue to grow at the College’s Outdoor Education Center at Raquette Lake. The new Adirondack Trail Blazers program, which introduces incoming first-year students to SUNY Cortland’s unique outdoor campus in the Adirondack Mountains, welcomed 28 members this fall, up from 10 in 2013, its inaugural year.

• Grant-funded work has reached an all-time high at the College, with 65 awards accounting for more than $3.8 million in sponsored program activity.

• More than $130 million in construction projects are in the works or have recently finished.

• This past spring, Dragon Hall became the first college housing structure in New York state to secure Leadership in Energy and Environmental Design (LEED) certification at the platinum level.

• More than 20,000 students in kindergarten through grade 12 have benefited since 2008 from the teacher training offered by the Seven Valleys Writing Project, a National Writing Project program based at SUNY Cortland.

Although SUNY Cortland students are among the most successful in the nation, they are not immune to troubling national trends that show college students drinking irresponsibly and engaging in behavior with potentially devastating consequences, such as sexual assault.

“We need a new standard of caring,” he said, noting that the College has created a task force to implement recommendations stemming from last fall’s unruly Cortaca Weekend activities and will soon introduce an online tool that will let people report possible sexual assaults anonymously. “…We as a community have to make sure we protect our community.

“My message to you is that we need to have those difficult conversations with our students.”

President Bitterbaum also touched on the College’s budget and important conversations affecting colleges and universities, such as a proposed national ratings system and the role of a liberal arts education.

President Bitterbaum wrapped up his talk by encouraging the College’s faculty and staff members to sit in on a course from a colleague. As an example, he detailed the efforts of a longtime foreign language professor who successfully completed a master’s level physics course.

“The truth of the matter is that we’re an amazing institution, an amazing college, and we’re doing very well,” the president said. “The state and the nation are throwing some unique things at us, but we have a gutsy group of administrators and staff.

“We will continue to be very successful.”